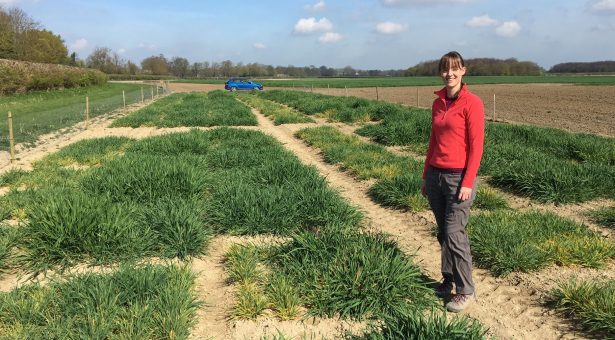 Until its privatisation in the late 1980s, the Plant Breeding Institute in Cambridge was renowned as a prolific stable for young plant breeders, combining the fundamental plant science, applied crop research and commercial breeding activities needed to train and prepare new entrants to the profession.

Many of today’s most successful plant breeders, now approaching the latter stages of their careers, entered the industry through this route.

For aspiring plant breeders today, the postgraduate MSc course in Plant Genetics and Crop Improvement – run jointly by the University of East Anglia (UEA) and the John Innes Centre – has earned a similar reputation as a recognised entry point for the next generation of plant breeders.

Now in its 20th year, the course is unique in its focus on equipping students with a broad understanding of the scientific and practical aspects of crop improvement, and in its partnership with commercial plant breeding companies.

The MSc incorporates scientific modules covering topics such as molecular genetics, plant genomics and statistics for plant science, as well as a six-month laboratory-based research project.

Alongside the plant science expertise at the John Innes Centre, the course is strongly supported by BSPB and its member companies through a regular programme of lectures and visits to plant breeding stations.

Here four past students describe their experience of the MSc course, and how it helped prepare them for a career in the plant breeding industry

“I became interested in plant breeding and crop development after studying agriculture at Harper Adams.

In July 2001, I began working for Advanta Seeds at Boothby Graffoe, Lincolnshire, as a member of the field and vining pea breeding team.

I re-located to North Norfolk in 2005 when the company changed ownership to Limagrain UK. By 2007, my main focus had shifted towards vining peas, and a brief spell leading the vining pea programme as maternity cover fuelled my interest in the Plant Genetics and Crop Improvement MSc.

From 2009-2011, I took the course part-time over two years while continuing my full-time role with Limagrain which, although challenging, was extremely rewarding. The content of the course and the relationship with the John Innes Centre is second to none and I would recommend the MSc as a great springboard to anyone interested in pursuing a career in plant breeding.

As a result of the additional MSc qualification, I took over responsibility for vining pea breeding, and led the marker-assisted selection programme for Limagrain pulse activities.

In 2017, after a restructuring of the business, I was promoted to global pulses breeder for the Limagrain group.”

“After completing a Biology degree in Brazil, I took on a temporary job working for a multinational plant breeding company. Working alongside the researchers and breeders confirmed my ambition to pursue a career in plant breeding, but I needed further qualifications to move forward.

The MSc in Plant Genetics and Crop Improvement at UEA was recommended to me by my university tutor, and after researching other courses elsewhere in Europe and North America I applied to take the course full-time from 2014-15.

What sets the course apart is that lecturers and tutors are not only up to date with the latest developments in plant genetics and molecular science, but they are also closely linked to what is happening in the plant breeding industry.

These connections are reinforced by the direct involvement of commercial breeders as guest lecturers on the course. For the past two years I’ve had the opportunity to go back to the MSc to lecture on barley breeding, and I enjoy the chance to give back to a course that was so formative for me.

The knowledge, skills and contacts I acquired on the MSc course led to my current role as Assistant Barley Breeder at KWS UK, where my focus is on releasing elite barley varieties and identifying and introducing new sources of disease resistance.”

A degree in microbiology at Cardiff University first stimulated my interest in the relationship between plants and bacteria, and the interaction between crops and environmental stresses.

I applied to study the MSc course  full-time from 2014-15, initially thinking it would lead to a role in plant pathology.

However, the technical content of the course, the direct involvement of plant breeders as lecturers, and the opportunity to visit commercial breeding stations, gave me new insights into plant breeding as a potential career path, and a way to apply plant science in a real-life, practical context.

Through the course I made valuable contacts in business and academia, which led to further opportunities in cereals related research at Limagrain UK and Rothamsted Research, before I secured my current role as a member of the wheat breeding team at RAGT Seeds.

After working in seed production for seven years and with an interest in pursuing a career in plant breeding, the MSc was recommended by a colleague who had already completed his first year part-time.

Having researched the course contents, which balances broader plant science topics with the specifics of plant breeding,

I applied to take the MSc on a part-time basis from 2009-11. I can honestly say it was the best decision I have taken in my career so far.

The knowledge and skills I gained on the MSc helped further my career from seed production to my current role as a wheat breeder with Limagrain UK. I particularly valued the opportunity to interact with world leading plant scientists, and during the six-month research project – with access to the support and facilities of UEA and the John Innes Centre – I learnt skills that have proven invaluable in my plant breeding career.

We are fortunate in the UK to have so many outstanding scientists, especially in plant genetics, and this MSc has many of them contributing to the course.

This article first appeared in the BSPB Autumn 2019 newsletter and is reproduced here with their permission.