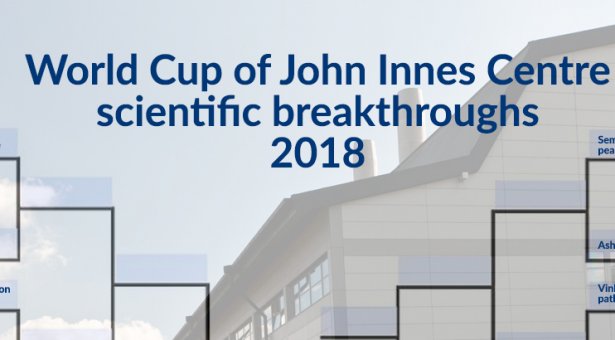 This summer, by complete coincidence, we thought it would be fun to run a World Cup.

Rather than the more traditional football theme, ours would see 16 scientific advances made here at the John Innes Centre face-off in a public twitter vote to find a champion*.

* Disclaimer – “champion” in this context does not mean “best” or “most valuable”, it merely means the winner of this purely fun twitter game…

The first (and ultimately most difficult as it turned out) task was establishing our 16 qualifiers.

With a history spanning 109 years and the world’s foremost plant and microbial scientists who do, or have done, their research here this was no mean feat.

Added to that, how do you quantify what is and isn’t a breakthrough and what is comparable across such a broad spectrum of science?

Can you for example compare the fundamental science of our early genetics and fruit-breeding work led by William Bateson, with modern techniques that are uncovering viruses in atomic detail being done by Professor George Lomonossoff and Dr Keith Saunders? And how do you then compare that to the more applied science being done by people like Professor Claire Domoney on improving the resilience and sustainability of UK pulse crops?

We decided there was no definitive answer to this question, so in the interests of doing something which might be fun, we ignored it.

Instead we decided that we would try and cover as broad spectrum of our research as possible, covering the widest possible range of crops, microbes and techniques, from broccoli to wheat, oil seed rape to ash trees and from algae to ants, all while picking stories that would hopefully resonate with scientists and the public alike. Hoping that the people of twitter may find out something interesting that they didn’t already know we did, or be tempted to read a little deeper into the science behind our 16 qualifiers.

After a number of revisions, we had our final 16. From there we conducted a glamourous live draw in the Communications and Engagement office, via the fool proof method of putting pieces of folded up paper in a larger conical beaker, to see who would face who. It was quite a moment.

The final 16, and who they would face were as follows (click the names to find out more about the incredible pieces of research and the scientists behind them);

For many people the name ‘John Innes’ is synonymous with compost and, despite us having had nothing to do with compost for over 70 years, we receive a couple of compost enquiries every week – sadly we can’t help with any of them.

The compost story is however one that aptly demonstrates what we do as a scientific research institute.

As we do with scientific breakthroughs to this day, we undertook the initial compost research and then, when it was ready, we gave it away for society as a whole to benefit from.

Up against this formidable foe was Prof Enrico Coen’s group and their world-renowned research on flower colours and shapes, investigating how small groups of cells in microscopic buds turn themselves into the diverse flower and leaf shapes we see around us.

For us it was too close to call.

Meanwhile the final tie out of the hat (beaker) pitted Prof Cathie Martin’s group and their famed ‘Purple tomatoes’, up against our ongoing work on ‘Streptomyces’, which has produced many different antibiotic breakthroughs over the last 50 years, led by Sir David Hopwood.

The round of 16 produced some close matches, a couple of shocks and some hammerings. (Winners in bold).

First up, ‘Compost recipe’ continued to show its remarkable ability to hang around, clinching a surprisingly decisive 60 – 40 win over ‘Flower shape and colours’.

Knife-edge results would prove a feature of the early games as ‘Green Revolution Genes’, ‘Biofortified wheat’ and ‘How plants remember’ all clinched narrow wins.

Our first thumping came courtesy of ‘Ash Dieback’, which saw off the ‘Semi-leafless pea’ 71-29, sparking an avalanche of big wins that saw ‘Turning plants into vaccine factories’, ‘Speed breeding’ and ‘Streptomyces – Antibiotics’ all seal quarter-final places.

The quarter-finals were intriguingly matched and pleasingly retained a broad spectrum of John Innes Centre science, with fundamental and applied science, with wheat, microbe, flower, tree and antibiotic research all represented. Of course, the compost recipe continued to hang around too.

Compost couldn’t win the whole thing, could it?

First up in this round, and ‘Compost recipe’ is finally defeated. The king is dead, long live the king.

The next day ‘How plants remember’ secured progression to a semi-final meeting with ‘Green Revolution Genes’ with a more convincing 63-37 win over ‘Biofortified wheat’.

This was followed up with our most comprehensive win yet as ‘Turning plants into vaccine factories’ puts ‘Ash dieback’ to the sword; 78-22.

But it was our fourth and final quarter-final, that would prove the most dramatic clash yet.

Kicking off at 9am, ‘Streptomyces – Antibiotics’ took a commanding early lead, taking a massive 80% of the first 2 hours of voting. Then the comeback began. Backed by an increasingly vocal online twitter support, ‘Speed breeding’ raced back into the contest, nudging ahead just after midday and, despite a brief ‘Streptomyces – Antibiotics’ revival early in the afternoon, went on to extend their lead and seal their semi-final match against the previous day’s big winners; ‘Turning plants into vaccine factories’.

And so, the semi-final scene was set.

There was no let-up in the drama and, just like in the football equivalent over in Russia, another pre-tournament favourite was about to go home early…

That fate befell ‘How plants remember’, which tumbled out of the competition to the previously unfancied ‘Green Revolution Genes’; whose resilience and ability to continually grid out narrow wins, makes them our Croatia.

The real drama was to take place in the second semi-final when ‘Speed breeding’, who had memorably won through to the semis with a dramatic turnaround against ‘Streptomyces gene cluster for antibiotics’, got a taste of their own medicine.

Almost 200 votes were cast and with 30 minutes remaining ‘Speed breeding’ held a 1% lead.

Unable to bear the tension, we went to lunch.

When we returned a late flurry of ‘Turning plants into vaccine factories’ pressure, who had garnered a vocal backing through the morning, had clinched a dramatic 2% swing and snatched an incredible 51-49 victory from the jaws of defeat.

Just like that we had our final, in which an established name; Professor George Lomonossoff’s lab and ‘Turning plants into vaccine factories’ (France) would take on plucky newcomers Professor Robert Sablowski and Dr Scott Boden’s ‘Green Revolution Genes’ (Croatia).

Recognising the gravitas of the event, we postponed our weekly #GuessTheImage and decided to give the final the whole weekend to be settled.

In a final that mimicked the real thing, the favourite took an early lead. By lunchtime of day 1, ‘Turning plants into vaccine factories’ held a 60-40 lead, but again taking its lead from the Luzhniki Stadium in Moscow, back came the underdog.

As we approached halfway, the lead had been cut to 52-48 and the comeback was well and truly on. Then, almost as quickly, it was snuffed out.

With their side in trouble, ‘Vaccine factories’ fans found their voices and roused another flurry of votes, to take them back out to 60-40. As night fell and we headed into the closing stages there was a final small swing back to ‘Green Revolution Genes’, but it wasn’t enough and ‘Turning plants into vaccine factories’ held on to secure the title.

Congratulations to Prof George Lomonossoff, Johanna Marsian, Leaf Expression Systems and Frank Sainsbury for clinching the title. A trophy is en route to the lab.

Finally, thanks to everyone for playing along. We had over 1,000 votes through the tournament and not a small amount of fun.