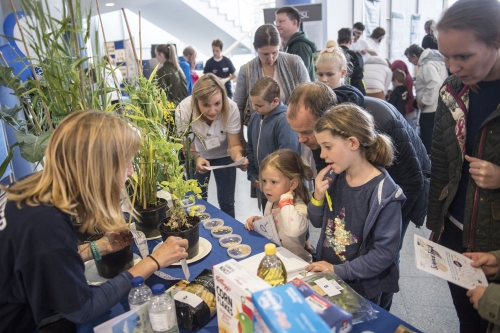 In 1967 the John Innes Institute, as it was then known upped sticks and moved from Bayfordbury in Hertfordshire to Norwich.

In celebration of the 50th anniversary of this move, we recently flung open our doors and invited everyone to come and look around, meet the scientists, and get hands on with our science. There were plenty of fun activities and opportunities to meet our scientists.

Shamefully, the last time we opened our doors to the public was back in 2009, for our centenary celebration. Much has changed in the 8 years since then and we were excited to speak to lots of people and show everyone the world-leading research that we do.

The support of our local community, and allowing as many people as possible to find out more about what we do is important to us, so in the build-up to the event we were delighted to welcome both BBC Look East and BBC Radio Norfolk onto the site, to chat to scientists and preview the event.

We were also welcomed onto Future Radio and featured in the Eastern Daily Press, helping to promote the event across Norfolk and give people who couldn’t attend the open day a chance to find out a bit more about who we are, what we do and why we do it.

On the Thursday before the event, BBC Radio Norfolk’s Thordis Fridriksson broadcast her show live from one of our laboratories. The 3-hour morning show included interviews and hands-on demonstrations of some our science and the things that we do here, there were appearances from John Innes Centre Director Professor Dale Sanders, Professor George Lomonossoff and Dr Anne Edwards.

Anne enthusiastically told the story of how the institute invented and then gave away the recipe for the famous John Innes compost as part of the ‘Dig for Victory’ war effort. The show finished with a glorious hour of plant and science themed tunes requested by the listeners.

In the days and weeks before the event staff from across our site came together to transform the Conference Centre, glasshouses, seed store and grounds into an interactive, accessible, and fun-packed exhibition of the breadth of work that goes on here. We have a large site, and we wanted visitors to get a real feel for the research that we do.

Saturday dawned breezy and wet – but that didn’t seem to dissuade the eager public. Despite the doors officially opening at 10am, the Conference Centre was awash with visitors by 9:45.

Our team of volunteers were quickly in the thick of it, running busy activities and exhibits spread right across the site. By 11am the whole site was buzzing as visitors explored and eagerly got involved with all manner of hands-on activities including extracting DNA from a strawberry, listening to a tree drinking, making DIY slime, seeing some creepy crawlies, tasting pea snacks, climbing aboard a tractor and exploring our greenhouses.

Tours of our historical collections, seed store, bioimaging and metabolomics departments proved extremely popular and the limited spaces quickly filled up. Because of the limited space in our labs we had to make sure that groups were small enough to fit into the small spaces, which meant that unfortunately some visitors were left disappointed. Luckily there was so many other activities going on that most people had enough to keep themselves occupied, and nearly everyone left with a smile on their faces.

The day ended soon after 4pm, despite some people who were still keen to continue exploring. The eagerness and enthusiasm to learn about our science was really inspiring. We will factor in the popularity of these in-depth tours, and the sheer number of you who turned up into our future plans. As the staff came together to begin the clear up, there was a great sense of achievement sprinkled among the tired feet and sore throats.

We estimate that around 3,000 people came on-site over the course of the day, and nearly 100 staff volunteered to help. Most visitors came from the local community (Norwich and Norfolk), but we also welcomed visitors from as far afield as Devon, Nottinghamshire, Cambridgeshire and Lincolnshire. We even had one group from Canada.

Thanks again to everyone who helped make the Open Day such a huge success, both the staff of the John Innes Centre and The Sainsbury Laboratory but also all the lovely folk who came along to find out about the wonderful world of plant and microbial science.

Perhaps we won’t wait 8 years to do it again.