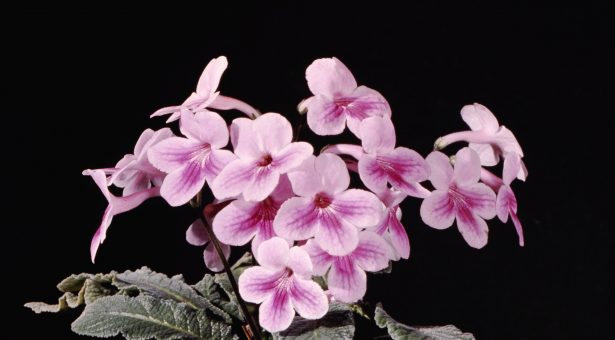 A decade on, the variety was also named the ‘People’s Choice’ for ‘Plant of the Decade’ in this year’s virtual Chelsea awards.

Sarah Wilmot re-visits the history of Streptocarpus breeding at the John Innes and celebrates the contributions of two Alumni from our horticulture team.

“The story has its roots in the 1930s, but the history of the origins of Streptocarpus in our homes and gardens goes back a little further:

Streptocarpus (meaning twisted fruit) is a genus of herbaceous plants that was first brought to England from Southern Africa by Kew plant collector James Bowie in 1818 – a large blue-flowered plant S. rexii which first flowered at Kew Gardens in 1827.

A second species S. saundersii was introduced in 1861, and a third S. parviflorus in 1882. A really productive phase of hybridisation in Streptocarpus began after the brick-red single-leaved variety S. dunnii flowered at Kew in 1886.

The garden strains in cultivation in Britain (known collectively as S. hybridus) developed from this mixed parentage. They are also sometimes known as ‘Cape primroses’, taking their name from Cape Province in South Africa.

“Running some 500 miles from Cape Province through Natal to the Transvaal and forming the eastern scarp of the high central plateau of South Africa, is that great range of hills, the Drakensberg. The eastern slopes are furrowed with many narrow gorges, known as kloofs, which are often wooded and provide cool moist conditions for plant life… the kloofs are typically the home of those species of Streptocarpus from which the familiar garden hybrids have been developed” said, William Lawrence, who was working on the genetics of colour inheritance at the John Innes.

In 1947 he bred the John Innes variety ‘Constant Nymph’. This was the first of the modern multi-flowered Streptocarpus varieties with a flat face. When the first plants appeared in this country, leaf cuttings were passed around as something very special and after more than a hundred years of moderate use as an indoor plant a new wave of interest in Streptocarpus began.

William Lawrence began his career in horticulture to save his eyesight, after the family doctor told his parents ‘the boy may go blind unless he gets a job out-of-doors’.

Fortunately, the John Innes Horticultural Institution was just half a mile away from Lawrence’s home and the Director, William Bateson, was persuaded to take him on as a ‘garden boy’ in 1913 after learning of his predicament.

When Lawrence was 16 years old, Bateson surprised him in the corridor with a gift of two volumes of Darwin’s book Variation in Animals and Plants under Domestication, and with this encouragement Lawrence began his self-education in genetics, then a new science in Britain of which Bateson was the leader.

After further garden training at Kew, Lawrence was recalled to the John Innes by a letter in Bateson’s untidy scrawl offering him a permanent job. He was taken on as a sub-foreman and then technical assistant in the fruit department, but his career was also steered into genetics when in the summer of 1925 Bateson asked him to take over his work on the genetics of a peculiar flower colour pattern in the Dahlia variety ‘Union Jack’; it was with Bateson that Lawrence learnt his first lessons in scientific observation and he was probably Bateson’s last ever student.

From 1929 Lawrence was helped to make thousands of pigment identifications by a biochemist, Rose Scott-Moncrieff, who had begun to look into the chemistry of flower colours in the plants under investigation at John Innes.

Scott-Moncrieff’s work is commemorated today for contributing significantly to the development of biochemical genetics: by the end of the 1930s she had clarified the basic biochemical nature of the action of genes involved in anthocyanin synthesis (one family of flower pigments), or as Lawrence put it “we were able to establish precisely what each gene did in chemical terms in controlling flower colour”.

From there, Lawrence was promoted into the busy world of garden supervision and student training when he became Garden Superintendent in 1932, where he became occupied with developing the famous John Innes composts.

However, disruptions in the biochemical team at John Innes delayed his progress on Streptocarpus.

Scott-Moncrieff married and moved to India in 1937 and was replaced by J. R. Price, from the same chemical laboratory at Oxford that had trained Scott-Moncrieff.

Her assistant Miss V. C. Sturgess helped bridge the gap left by her departure but WWII effectively closed the department down when Price and Sturgess transferred to war service in 1941. Neither returned to the institute after the war and it was another decade before biochemical work on plant pigments resumed.

Lawrence’s studies also suffered from the extra workload imposed on him by the reduction in staff as more and more of his gardeners were called up for war duties.

But Lawrence continued his researches intermittently until the upheaval caused by the institute’s move from London to Bayfordbury in Hertfordshire in 1948-49.

The removal and building of the new glasshouses put a severe strain on Lawrence. His employers feared that the strain had produced the irreparable rupture in his retina at the beginning of May 1950 and they relieved him from routine work and appointed him head of a new Garden Research Department. This change allowed Lawrence to complete his experiments on Streptocarpus in 1953, though they were not written up and published until 1957.

One of his research findings, against what most plant dictionaries stated at the time, was that the garden forms of Streptocarpus originated from just three species (rexii, dunnii and parviflorus) that had been crossed by the Curator of Kew Gardens, William Watson, back in 1887.

Streptocarpus ‘Constant Nymph’ was only a by-product of Lawrence’s scientific journey of discovery but it launched a new horticultural industry.

Produced in 1946 by crossing a hybrid Streptocarpus called ‘Merton Blue’ (S. hybridus) with a species called Streptocarpus johannis (introduced just before World War II), this plant flowered continuously from April to November and with additional light could be kept in bloom throughout the year (unlike the original Streptocarpus species and garden varieties). It had the very free flowering and dainty habit of S. johannis with larger flowers and the good blue colour of Merton Blue. It was easy to propagate and is very tolerant of the conditions prevailing in the average house.

Soon it was common to see ‘Constant Nymph’ on display in florists’ windows in Paris, Amsterdam and other major European cities. The Dutch horticultural industry popularised and made a good market for the plant in Europe and the United States.

In England the plant was largely neglected by the horticultural trade until it was exhibited at the Royal Horticultural Society in London in 1962 and 1965 and won prestigious awards. It proved to have a lasting appeal: ‘Constant Nymph’ is still on sale today, 74 years after it was produced.

Lawrence had named his new Streptocarpus to signify its most valuable characteristic – its long flowering period – but the name would also have been familiar to Lawrence’s contemporaries as a reference to the best-selling ‘Bohemian’ novel by English author Margaret Kennedy (‘The Constant Nymph’) which was published in 1924. The book was adapted into a stage play and afterwards made into four films. The last film version, starring Joan Fontaine as the main character, was released in 1943 shortly before Lawrence produced his stunning variety.

Amazingly blue and white were still the only colours of Cape primroses commercially available until (Andrew) Gavin Brown started his experiments with Streptocarpus at the John Innes Institute in the 1970s.

Brown’s project, which started in 1969, aimed to increase the colour range of Streptocarpus.

The cross that made ‘Constant Nymph’ was remade several times, but a pink or red form of S. hybridus was substituted for one of the parents each time. All the first-generation seedlings were blue, but when these were cross bred with each other in the second generation, white, pink, red, magenta, purple, and pale blue flowers were produced and all retained the constant flowering habit. Ten of these hybrids were selected for naming and further testing.

The new John Innes varieties received considerable attention from plant breeders in Holland (where they were awarded a gold medal), but the British market for these new houseplants was slow to develop.

Brown’s retirement in 1975 ended the breeding programme and this, together with John Innes’ overall policy of closing its ornamental plant work, removed the incentive for John Innes to market the new varieties through NSDO.

Nevertheless Louise, Paula, and Tina were all awarded the Royal Horticultural Society’s Award of Merit. Today Paula and Tina carry the RHS ‘Award of Garden Merit’(AGM), along with ‘Helen’, another variety bred by Gavin Brown. The pink-flowered variety ‘Tina’, with a more compact habit than ‘Constant Nymph’, remains a popular variety today.

William Lawrence’s career at John Innes spanned 1913 to 1963 and his many contributions to horticulture were recognised by the RHS in 1950 when he was awarded the Victoria Medal of Honour.

Gavin Brown MBE, joined John Innes in 1930 as a student gardener. He worked at all three of John Innes’s sites, moving up the career ladder to become ‘Curator of the Gardens’ (Head of the Horticulture Department). During his career he made important contributions to fruit growing, for which he was awarded the RHS’s Jones-Bateman Cup in 1960. He became a well-known figure in the horticultural world and was awarded the RHS’s Veitch Memorial Gold Medal in 1979 for services to horticulture.

Lawrence’s and Brown’s legacies with Streptocarpus didn’t end there though. Paul Dibley has recently written of his childhood and the origins of the Dibley family nursery.

Their interest in breeding Streptocarpus, he recalls, began when the groundsman at his father’s school (where he was a teacher) gave him ‘Constant Nymph’. This gift led to the whole greenhouse at home being taken over by these plants. Gavin Brown later visited Dibley’s nursery and became a close family friend.

Lynne Dibley was inspired by the John Innes varieties and went on to breed her own totally different style of Streptocarpus – and success followed. Dibley’s released their first variety ‘Crystal Ice’ in 2000 which was awarded the RHS’s Award of Garden Merit in 2001.

We’re sure Gavin would have taken great pleasure in seeing all that Dibley’s have achieved with Streptocarpus and their ‘Plant of the Decade’ ‘Harlequin Blue’.”