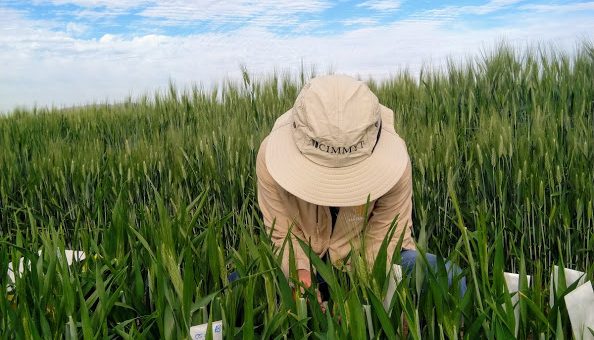 Last month we were proud to announce that PhD student Anna Backhaus, was the recipient of a prestigious Women in Triticum (WIT) award.

Here, Anna reflects on the award and an interrupted but still memorable trip to Mexico – and offers some advice for colleagues.

“In March I departed Norwich Airport expecting to spend the next month in Mexico. I had sown all my seeds at the John Innes Centre, cleaned my desk and handed over my beloved houseplants to friends. As part of receiving this year’s Women in Triticum (WIT) award we were invited to visit the international centre for Maize and Wheat Improvement (CIMMYT) in Obregon Ciudad.

However, two weeks later I found myself living back home in my mother’s house, cooking wonky tortillas for dinner, a trip cut short by Covid-19. Despite the abrupt end of the trip, I’d had a wonderful journey.

The first days of the trip were spent in the CIMMYT headquarters, near Mexico City. Our group was Amor Yahyaoui, who was leading the training program and the other WIT awardees of 2019/20: Fiktre and Yewubdar from Ethiopia, Ritika from India, Valentina who just started her Post-doc in Canada and Dalma from Chile.

One of the highlights of the trip was that we spent so much time together as WITs and thus made great new friendships (possibly the slightly mad ending and evacuation out of Mexico also helped us to bond).

Upon our arrival, we immediately started with what we came for; the science, and joined the ongoing conference on insect pests.

We also got a tour of the centre’s facilities; my personal highlight was, of course, the cold vaults where the germplasm collection is stored. The vaults hold the seeds collected over many years in all regions of the world. The seeds and grains are valuable as they are used in today’s pre-breeding programs to introduce new genetic material and improve agronomic traits.

We got to see this pre-breeding material a few days later when we arrived in the field station 1,500 km north of Mexico City. In the field we talked with many CIMMYT scientists and got to see a snapshot of their work.

We also did some hands-on training, such as crossing wheat varieties, scoring of diseases or washing roots with high pressure hoses (for logging experiments). At the Obregon CIMMYT camp station we were also joined by another WIT awardee, Carolina, who works in the Physiology department of the centre.

I must say a huge thank you to everyone at CIMMYT, especially to Carolina and her colleagues from physiology as well as Karim Anmar, head of the Durum program, for making our two-week stay at CIMMYT so fantastic.

Most of the usual visitor’s program for WITs had been cancelled due to Covid-19 and much of our day-to-day program had to be improvised. They all made a huge effort and went out of their way to introduce us to CIMMYT, take us to the fields, explain their work to us and, of course, show us life in Obregon. I am looking forward to seeing them all again at future wheat(y) meetings.

The Women in Triticum is awarded yearly to early career scientists by the BGRI (Borlaug Global Rust Initiative) to continue the legacy of the pioneering agronomist Dr Norman Borlaug. The award is supported by Jeanie Borlaug, daughter of the Nobel peace prize laureate.

I think the award is so relevant as institutes, conferences, and especially (senior positions) around the globe are still male dominated. The opportunities, such as visiting CIMMYT and attending the bi-annual BGRI meeting, that come with the award are great opportunities and I would encourage everyone to apply (and not only once, some of us applied five or more times)”.

Anna’s PhD is funded by the John Innes Foundation. She is a second-year student supervised by Professor Cristobal Uauy and Professor Richard Morris.