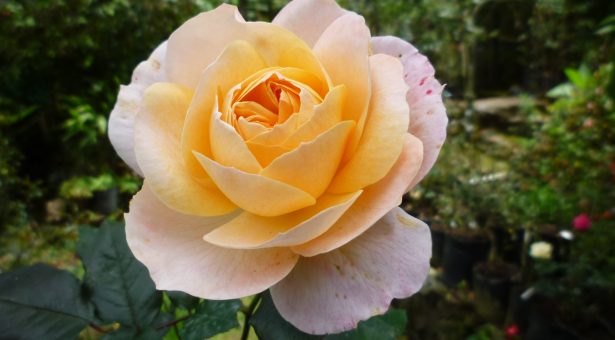 Janaki worked at the John Innes Horticultural Institute from 1940-45. As an Indian woman she battled prejudice and obstructions throughout her career, but still achieved outstanding success in her field, in particular her work on sugarcane and aubergine.

An expert in cytogenetics (the genetic content and expression of genes in the cell), Janaki conducted research on chromosome numbers and in a variety of garden plants while in England.

Her work lead to breakthroughs in the understanding of evolution of species, and varieties.

To celebrate her remarkable career and contribution to plant science, two Indian plant breeders, Girija and Viru Viraraghavan have bred a new rose, which they have named ‘E.K. Janaki Ammal’.

“We had always wondered about the person Janaki Ammal and her astonishing and remarkable history, going all the way back to May 1966 when Viru began breeding roses and bought a copy of ‘Chromosome Atlas of Cultivated Plants’” Girija explains.

“I wanted to focus on rose species native to India, but I wasn’t sure how difficult it would be to breed with them, so I pored over this book, checking out the ploidy of different rose species. I’ve referred back to it so often over the years to check the ploidy of many other plants as I breed rhododendrons, magnolias etc, that we had to have it re-bound as the pages were coming apart” Viru adds.

“We both felt very strongly that enough recognition had not been given to this pioneering woman scientist of our country, who practically died in oblivion, despite her mammoth botanical research, so we felt that we would like to honour her by naming a rose in her name.

“We had a Rosa clinophylla seedling which we had tested for many years, and it had both flowered well and continuously, in a medium dark rich yellow.We had read that in later years Janaki only wore saris of this colour so we thought it would be befitting to have this particular rose, in her colours.

“Before we named it though, we wanted to try and speak to someone connected to Janaki, such as a relative. Luckily for us our good friend Dr Henry Noltie of the Royal Botanic Gardens in Edinburgh, Scotland, an Indophile who specialises in British Indian botanists, having written biographies of Robert Wight (the East India Company surgeon who was more of a botanist, in the 1800’s), and Hugh Cleghorn (India’s first Inspector General of Forests) told us about Dr Vinita Damodaran, Janaki Ammal’s great niece, who is Head of South Asian History at the University of Sussex, in the UK.

Henry knew her well having joined her on a trip to the Botanical Survey of India in Kolkata in 2016. He also helped set up the Kew exhibition on the botanical explorations in India by Joseph Dalton Hooker. They also worked together on the new gallery of Botanical History which includes an entire floor on Janaki Ammal, featuring many photographs, facsimiles of her correspondence and her work papers, which only serve to highlight what an absolutely remarkable woman she was.

Through Henry, we wrote to Vinita, explaining that we had this rose seedling, asking if could we have her permission to name this rose for her great aunt? We were delighted when she said yes, in turn confirming her own delight that her aunt was to be commemorated in this way.

For those interested, the parentage of this rose is: Landora x [Montezuma x {Little Darling x ( R.clinophylla x R.bracteata)}]. It has been classified as a Grandiflora, yellow blend colour, fragrant, a tall growing shrub, disease resistant and continuous flowering.

We feel that it is appropriate that this new rose hybrid, which could be considered a ‘pioneer’ in rose breeding, as there are very few roses bred from Rosa clinophylla, was an apt choice for a rose to be named for Janaki Ammal, who was a pioneer in her own field. Incidentally, Rosa clinophylla is perhaps the world’s only tropical rose species and the centre of its natural distribution is India.

We have sent material of this rose for more plants to be propagated so that they can be planted in the gardens of the institutions she worked in—the John Innes Institute and the Royal Horticultural Society’s gardens in Wisley, and in the Botanical Survey of India’s gardens.”

Janaki’s career began in India, where she earned a Bachelor’s degree. Following this, in 1921 she studied for a Master’s degree in Botany from Presidency College in Madras.

A decade later Janaki moved to the USA, where she became one of the first women from India to obtain a PhD in Botany, at the University of Michigan, and remains one of the few Asian women to have done so.

Despite this success, Janaki still experienced discrimination at work. This led to her crossing the Atlantic and heading to the John Innes Horticultural Institute in 1940.

Janaki settled here in the UK, staying for the duration of World War II and braving wartime bombings. It is said that during the raids, Janaki would shelter under her bed, before emerging to sweep up broken glass in the office.

In our archives, there is an intriguing statement written by Ellis Marks that Janaki had smuggled a palm squirrel named ‘Kapok’ into the country when she arrived from the USA. Kapok lived with her at the John Innes Horticultural Institute for many years.

Janaki worked closely with the-Director, C.D Darlington. Their work culminated in the publication of the ‘Chromosome Atlas of Cultivated Plants’, in 1945. This is still considered a key text for plant scientists.

Returned to India, where she continued her long and distinguished career in science. At the Sugarcane Breeding Institute in Coimbatore,she was instrumental in selecting the best varieties for cross-breeding to produce the sweetest sugarcane while also analysing the geographical distribution of sugarcane across India.

We are proud to offer Janaki Ammal Scholarships to postgraduate research students, who are nationals of eligible developing countries, to help them to study for a PhD degree at our institute.

All students who meet the eligibility criteria receive a scholarship and applications are welcome from students wishing to study any aspect of plant and microbial sciences we are working on.

Overseas applicants from countries not covered by the Janaki Ammal Scholarship may be eligible for a John Innes Centre International Scholarship.