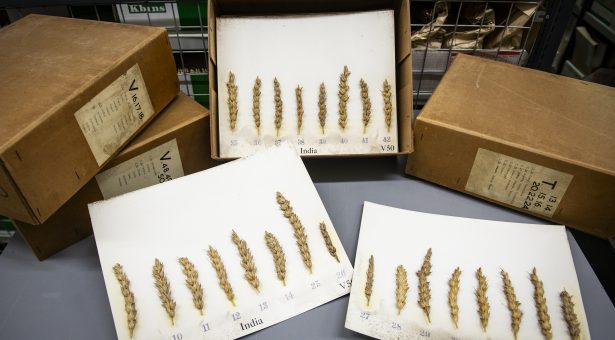 Our Germplasm Resources Unit (GRU) have recently repatriated to India more than 600 wheat landraces which are currently not in cultivation.

The GRU is an internationally recognised repository for the long-term curation and provision of crop and crop-wild-relative germplasm resources and stores germplasm collections representing the global natural variation of highly important cultivated species and their wild relatives.

As well as being a vital contribution which will feed into India’s future wheat breeding efforts to mitigate the effects of climate change, the return of seeds has cultural significance.

Many accessions of Indian-origin material, held globally, such as the collection at GRU, are traditional varieties or landraces with defined traits and form the backbone of crop gene pools and breeding programmes.

For example, a 2015 study, found that our own Germplasm Resource Unit was the third largest national holder of Indian Germplasm outside of India, a total of 1,714 accessions. The collection of this material continued until the 1970s, and includes a mixture of cultivars, landraces and breeders’ lines from various sources including local markets.

The GRU wanted to help repay India’s generosity by responding to a request by the Indian Council of Agricultural Research-National Bureau of Plant Genetic Resources (ICAR-NBPGR) for germplasm that had either become extinct in its homeland or was unknown if it was represented in Indian collections.

To that end, 620 Indian wheat landraces were repatriated to India from GRU, material that may no longer be grown locally or held in the gene banks of India.

“On the cultural aspect, this is like returning a work of art, or local creations. Unlike the Rosetta stone in the British museum, seeds can be easily replicated. It means that we can share it for the benefit of those who created it and of those who saved and conserved it and beyond to support global food security” explained Germplasm Resource Unit Manager Dr Noam Chayut.

The materials sent to India from the GRU will now be used there for breeding projects aiming to mitigate the effects of climate change by developing wheat varieties suitable for elevating temperatures.

“India has initiated genotyping and phenotyping of most of its Plant Genetic Resources for trait and gene discovery. These 620 accessions will be a part of more than 7,000 accessions that are being genotyped and phenotyped for large number of agronomically important traits” added Dr Kuldeep Singh, Director of the ICAR-National Bureau of Plant Genetic Resources in New Delhi, India.

With 70% of its rural population still depending on agriculture for their daily subsistence and livelihoods, genetic resources such as these locally adapted wheat landraces, are invaluable to future plant breeding efforts in India.