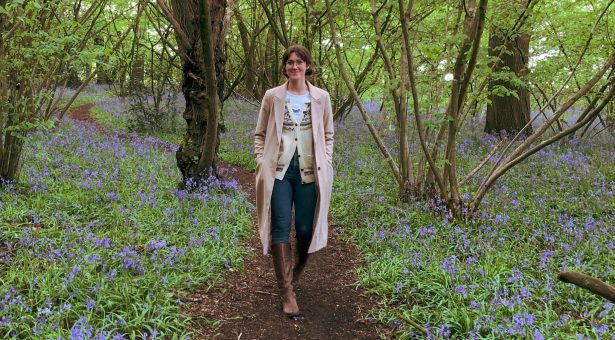 From a veterinary surgery to a plant science lab, via a classroom and a PhD, Dr Bethany Nichols career has been full of discovery.

We sat down with Bethany to ask her about her career so far and how she is using data and computational modelling to prove plants are cool.

“I’m a Computational Plant Scientist, science writer and communicator, and mother to a cat and a tortoise. I joined the John Innes Centre in February 2021, but my career trajectory has been a succession of hairpin turns.

Aside from one brief period of my life when I wanted to be Carol Kirkwood, because I thought she controlled the weather, I have always wanted to be a scientist.

Until the age of 16 I was convinced I would be a vet. However, while work-shadowing a vet, there was a disturbing experience concerning a Siberian hamster and I discovered I don’t have an affinity for customer or patient facing jobs.

It wasn’t until the first year of my undergraduate degree that I realised my love for plant science.

I was one of four students chosen to attend the Gatsby Plant Science Summer School. It was a week-long course, covering different research areas of plant science. We were able to try our hand at each and network with professionals across the board. By the end of the week, I knew it was right for me.

When I finished my undergraduate degree in biology from the University of Leicester, I trained as a secondary school science teacher. In the school’s newsletter, I was quoted as saying my one goal was to prove that “plants are cool”.

By the end of my first-year teaching, the romance of independent research lured me back to university.

In my thesis, “Should I stay or should I go? Surviving variable environments through dormancy and dispersal”, I used computational methods and mathematical modelling to investigate the impact of climate and environmental change on the plant behaviours, dispersal and dormancy.

Using models, I demonstrated that some plant species are able to sense their environment and increase or decrease their dispersing or dormant offspring in response. This enables certain species to be able to balance between a host of unfavourable environments where other species would go extinct. Thus, beginning to prove my point that plants are, in fact, cool.

During my PhD I undertook an internship as a Digital Communications Assistant at The Institute of Cancer Research (ICR), where I helped update and maintain the website, post on social media, design outreach programs and write for their blog. This was my first taste of science communication and I have been hooked ever since.

When I finished my PhD during the pandemic, sending in CVs for jobs was like throwing cups of water in the sea. Thankfully, the ICR invited me back to tide me over before joining the JIC. As well as a job, the ICR gifted me with a host of science communication skills which I’m excited to use during my time here.

My passion/obsession with plants has continued since the summer school, and this peaked during the first lockdown of 2020. I was supposed to be moving to Australia but had my visa postponed, so I moved in with my sister and brother-in-law in Devon, which isn’t anything like Australia but still very nice.

It was springtime and the wildflowers blossoming around me were a source of inspiration. I started posting pictures of them on my Twitter with little captions. People really enjoyed them because they couldn’t get out of their houses to see them and so I decided to turn the tweets into blog posts, and ‘Fronds with Benefits‘ was born.

Fronds with Benefits really started to take off within the first few months and I was engaging with new audiences. I began writing about topics that bridged gaps between science and history and popular culture, for example, Plant Science in The Legend of Zelda and International Day of Women and Girls in Science.

Here at the John Innes Centre, I work in Professor Lars Østergaard’s team and have been awarded a Postdoctoral Fellowship from the National Biosciences Institute and Alan Turing Institute. The fellowship aims to train scientists in machine learning and artificial intelligence approaches, and their application to life sciences.

I’m working with the BRAVO project to understand how phenotypic changes, such as branching and pod size, are genetically regulated during development in Brassicas. The current bottleneck towards achieving this goal is data processing.

Manually extracting data from images can be time-consuming and unreliable, but by using advanced machine learning approaches, I hope to train a computer to do this for me. With this bottleneck solved, I will be able to combine phenotypic and transcriptomic data collected throughout development, in response to changes in environmental conditions – demonstrating once again just how cool plants are.”