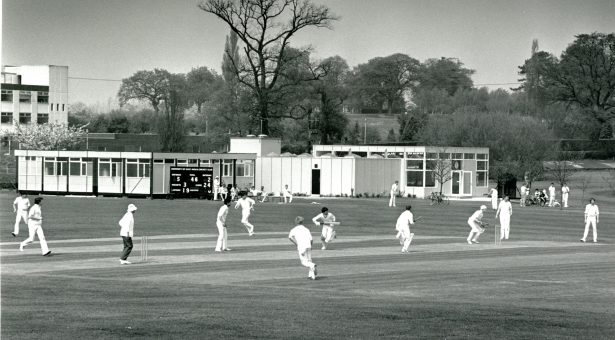 Dr Kevin Pyke completed his PhD on leafless and semi-leafless peas, here at the John Innes Centre in the 1980s.

We recently caught up with Kevin, to talk peas, PhDs, four-colour graphs and the John Innes Cricket team.

“I started at John Innes on the same day that Harold Woolhouse became Director, back in October 1980. I had arrived to work with Cliff Hedley and Mike Ambrose in Applied Genetics on leafless and semi-leafless peas.

A year or so earlier I had speculatively written eight letters around the country asking about PhDs including one to John Innes where my friend, Peter Lumsden had just done a summer placement.

I been interested in nature from an early age and it was my major interest through my childhood both in growing vegetables, collecting cacti and bird watching and general nature studies. It was clear that I was going to have a life involving biology in some way…

I was the only child in my class at primary school to pass the 11-plus in 1969, finding myself at Huish’s Grammar school for boys in Taunton where the education was excellent. Being passionate about the subject, I excelled in the sciences, especially biology and chemistry.

At that time Undergraduate sandwich courses were very popular where one did placements in research institutes and industry, giving a well-rounded appreciation of how research and development operates.

Thus, I did the Degree in Applied Biology at the University of Bath starting in 1976.

It was a four-year degree, the first two years being general biology and the third and fourth years having a choice of specialisations either animal science, crop science, microbiology or plant science. It was clear that I was bound to choose plant science and looking back on this I was very lucky as today no such opportunity exists to get that much experience.

On joining the John Innes, I recall there was quite a gulf though between those doing the new fast developing field of molecular biology and the rest of which I was a part.

I also vividly remember how friendly the people were. I quickly made friends with lots of PhD students, in particular Paul Lazzeri who started his PhD on tissue culture the same day as me with Graham Hussey.

A year later Anil Day started his PhD with Noel Ellis and we became friends. I was greatly inspired by Noel and that led to us doing a Southern blot experiment on rogue pea plastid DNA in late 1983 which made it as a chapter in my thesis.

Other memorable people from those times who I got to know well were Trevor Wang, Brian Snoad and Rod Casey.

The thing I remember most about the social side was the John Innes cricket team of which I was a main member during my time. The main organiser of the team and captain was Paul Linstead from Cell Biology (affectionately known as sleepy hollow in those days).

In the summer we played on the UEA cricket pitches weekly in friendlies against local cricket teams from Norwich and surrounding villages as well as playing away matches.

I was a spin bowler and took lots of wickets and in my last year was captain. This was tremendous fun and there were several memorable people in the team in those days including Jim Dunwell, who opened the batting, Anil Day and Norman Sunderland’s son who was a young chap who was rather good and helped us out when we were short. On occasion the new Director Harold Woolhouse used to wander across to watch sometimes and on a couple of occasions he umpired.

During my time at John Innes science evolved rapidly especially molecular biology and computing. I produced lots of data and wrote lots of papers so by the time I graduated I had my name on seven papers and conference proceedings.

I wrote all my thesis on the VAX main frame computer and Tam, D Roy’s secretary, typed it up on A4 pages for me costing £1 a page. Computing had just bought the first flat bed graph plotter and I printed out all the graphs in my thesis in four colours.  At the time that was a major event.

They were wonderful times and I really enjoyed my PhD work looking at the plant physiology and crop physiology of the leafless and semi-leafless mutant phenotypes of pea.

From the John Innes I went on to do a post doc on leaves and chloroplasts with Professor Rachel Leech in York. I ultimately stayed there for 11 years before getting a lectureship at Royal Holloway in 1994 and finally moving to a lectureship In Plant Sciences at Nottingham in 1999.

I have worked at the Sutton Bonington campus ever since, researching chloroplasts, leaves and tomato plastids. Hopefully I have also inspired large number of students in the ways of plants and plant sciences over the years.

I took partial retirement in 2018 on turning 60 but I look back on my career in plants science with great affection, especially my time at the John Innes.”

Thank you to Bridget Gillies from the UEA Archives for the photo.