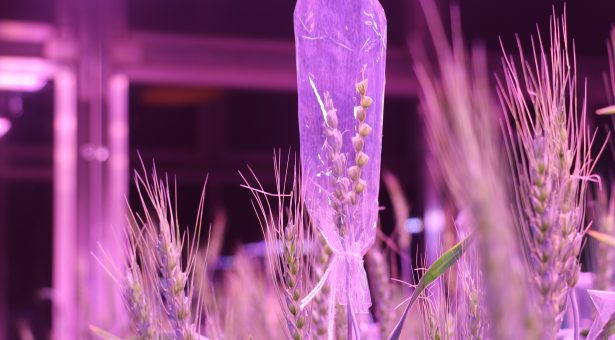 Researchers from the John Innes Centre and BecA-ILRI Hub have implemented a fast and easy-to-use genotyping technology, Kompetitive Allele Specific PCR (KASP), which has allowed African wheat researchers to drive their own research in Africa.

Recent discoveries made using this platform will inform breeding strategies for improving crops in East Africa, as part of an ongoing project between ourselves and BecA-ILRI Hub.

KASP is a fluorescent-based assay used to identify differences in DNA sequences.

In the past, SNPs have traditionally been genotyped using long laborious gel-based methods or expensive individual sequencing reactions.

More modern SNP genotyping using Next Generation Sequencing (NGS) technologies (e.g Genotyping-by-Sequencing) have also been developed but these are usually expensive and only economical for genotyping enormous number of SNPs (hundreds to millions), of which only few are informative.

KASP genotyping occupies a middle ground between these two extremes; offering a quick and easy-to-use method for genotyping a selected number of important and informative SNPs, across a large subset of plants, in a fast and affordable way. This makes KASP an essential tool in the Next-Generation breeding toolkit.

The idea to transfer the KASP capability to Kenya began with a John Innes Centre wheat genomics workshop led by Professor Cristobal Uauy and Dr Brande Wulff and hosted by the BecA-ILRI Hub.

Through workshop discussions and interactions, the participants identified the need for a flexible and more convenient marker system for breeders in the East African region.

Following the increased awareness and training on the application of molecular breeding and generation of high-density SNP data from the high-throughput NGS genotyping platform established at the BecA-ILRI Hub, the need for a KASP platform became more eminent. The platform was therefore established with the support and leadership of Dr Oluwaseyi Shorinola.

“[KASP] is a really powerful tool for accelerating crop variety development and verification in Africa. One important use of KASP is to facilitate the introduction of genes with known economically important effects through marker assisted selection. Thanks to advances in genomics, we now know a suite of genes that can improve different aspects of crop performance. Deploying KASP in Africa will enable local breeding programs to translate this knowledge for developing improved crops varieties” explained Dr Shorinola.

Wheat is one crop in which this KASP marker platform is already having impact.

As a major staple crop in East Africa, the increasing demand is currently met by importing 55% of domestic wheat supplies.

One way to realise the potential of East Africa for wheat production and reduce dependence on imports is to use technologies, such as KASP, to develop and adapt varieties suitable for local conditions.

Using this platform, researchers from KALRO and EIAR screened wheat varieties grown in East Africa over the last 100 years.

This African led study, using the KASP marker technology within Africa, is informing breeding strategies for Kenya and Ethiopia and in turn, has changed the perceptions of wheat research in Africa within the global wheat community.

“Through interactions at the workshop we grew to appreciate the needs of African researchers, off the back of this we were able to introduce a technology that has enabled them to conduct their own research in Africa. In turn, it has created a lot of awareness in the wheat community about the potential for molecular breeding to enhance African wheat” notes Professor Cristobal Uauy.

The successful development of these lines will further highlight the use of KASP for translational research, i.e. using the knowledge generated from an African-led study to deliver African-focused breeding outputs.

In addition, driven by the result of this study, Dr Oluwaseyi Shorinola returned to Africa as a recipient of a prestigious Royal Society FLAIR fellowship.

The platform compliments the existing high-density NGS genotyping platform in the facility. This allows African breeders to go from generating a vast amount of sequence information to having discrete low-cost diagnostic molecular tools (markers) which they can use in their breeding programs.

“Many African breeders have been trained in molecular breeding using the high-density genotyping platform at the facility in ILRI. The establishment of the KASP genotyping platform was timely as this is just what they needed to screen populations. Given the increasing demand, the platform has subsequently been transformed to a service unit providing services to breeders in the region” confirms Josephine Birungi, the Head of Technology at ILRI.