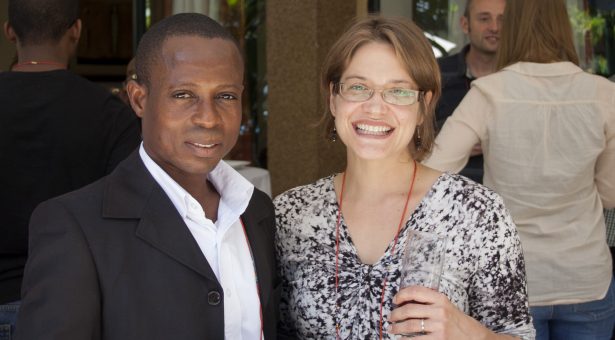 One of the reasons I love science is because it is so international and encourages you to move around, meet new people and grow as a person.

I grew up in a tiny California town just outside Reno, Nevada called Susanville. Stop thinking about palm trees, instead imagine cowboy hats, big trucks, and bales of hay and you have the right idea.

As soon as I was 18 I moved to Santa Cruz – my land of opportunity – for university. I got degrees in Ecology and Chemistry and wanted a job. I worked for a venture capital agrochemical company in the Silicon Valley for a year, where I tested experimental pesticides – it blew my mind.

I decided that I favoured genetic solutions over chemical ones for pest control and therefore I wanted to learn more about molecular biology.

As such, I worked as technician at UC Davis with the inspirational Simon Chan, and then moved to do my PhD in Seattle with the impressively creative Jennifer Nemhauser.

After 5 ½ years in Seattle, I knew that I wanted to do my Postdoc in another country.

I lived in Australia for a little while during university and found that I could only really learn about what it meant to be American by leaving. I also knew I wanted to have my journey of self-discovery in an international setting. I applied for the Marshall Sherfield Fellowship which is part of the Marshall Scholarship scheme based around the UK-US ‘special relationship’. It was set up after WWII for young Americans to study in UK universities.

To my surprise, I was awarded the fellowship and crossed the Atlantic with my husband, cat, and 35 suit-wearing elite graduates (how did a girl from Susanville get here?).

The fellowship paid for me to continue working in science, but was set-up to help me become a science ambassador, which meant I was initiated into International Relations and received an intense schooling in UK politics. This was perfect for me and has been invaluable in the work I have done since.

The fellowship led me to interview for a position in Prof Giles Oldroyd’s lab here at the John Innes Centre. It was an obvious perfect fit for me as he was working on an area which combined my passions for science, travel and my need to make an impact on the world; agriculture in Africa.

4 ½ years on, my role at the John Innes Centre now crosses two disciplines; I am the International Development Co-ordinator, working with Chris Darby, while remaining a Postdoctoral scientist working on symbiosis.

While I enjoyed doing research in the lab, I could never quite shake the nagging feeling that I wasn’t making a big enough difference in people’s daily lives. My work wasn’t having a very big effect on the ground and I found that frustrating.

I pour my heart into my work and I needed something to change. So, I sat down with Giles and asked how I could get to Africa and talk to scientists on the ground. Giles could not have been more supportive.

At that time, the John Innes Centre was forging a relationship with the Biosciences east and central Africa – International Livestock Research Institute (BecA-ILRI Hub). Jagger Harvey came to visit and whipped me into a frenzy of excitement. I travelled to Nairobi through the Bill and Melinda Gates Foundation Agricultural Research Connections program and met scientists working across Africa.

I realised there was so much I could do to contribute. I didn’t need to be a cowpea breeder, I needed to support people who were doing that important work – that could be my impact.

As a result, I developed the Agricultural Scientist Support Exchange Team (ASSET), which aimed to increase effectiveness of agricultural scientists in the United Kingdom as well as Sub-Saharan Africa by forming lasting collaborative links between the two regions.

ASSET pairs students from the UK and Sub-Saharan Africa by assessing areas of study and identifying students with similar interests. The professional development and productivity of the participants is facilitated through a peer-based network centred on peer-review exchange.

I ran the ASSET programme while being a full-time scientist in Giles’ lab, so it was a real labour of love.

I am super proud of what we achieved, despite sometimes feeling like it might be ruining my career, because I realised I was so passionate about it, I wasn’t sure I still wanted to do scientific research at all anymore.

Ultimately nothing was ruined and I realised I just needed to redefine myself and be open-minded about the path before me.

ASSET wasn’t perfect by any means, I had not really done anything like that before. However, sometimes I see people doing something, or saying something that was influenced by ASSET – like they are changed in some small way – and that is magical. That is how I know it was all worth it.

Eventually we reached the point where I was limited in what I could do. I needed the credibility to interact with Project Leaders and areas of the institute like the Graduate Studies Office to take my efforts to the next step.

Around the same time the John Innes Centre was intensifying its international outreach efforts, which in-turn created an opportunity for me to join Chris Darby’s team as International Development Co-ordinator.

While having someone like Chris in a scientific research institute is rare, it is invaluable.

Lots of scientists, by the nature of who they are and the projects they are working on have international development aspirations, so having someone who has decades of experience in international diplomacy raises the John Innes Centre’s profile and galvanises people to achieve those aims. It has been an honour to watch Chris in action and to learn from his experiences.

The future is a bit uncertain for me and I am not sure what the next step will be.

The experiences I have had at the John Innes Centre have convinced me that there is a place in this world for what I have to offer – even if it looks pretty unconventional and mysterious sometimes.

Failing that, I might just decide to become the best Zumba instructor the world has ever seen…

That’s the beauty of science, it is a way of seeing the world and you never know what path might open to you next.

Your expertise is in curiosity-driven, evidence-based thinking and that is increasingly needed everywhere.

Stay true to your dreams, even when you can’t quite tell what they are – clarity will come and the world needs your passion.