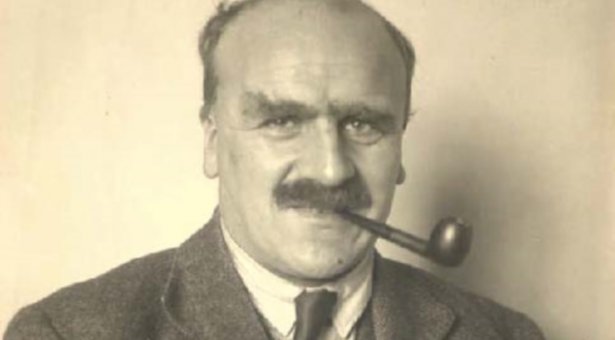 Haldane held a part-time appointment as ‘Supervisor of Genetical Experiments’ from 1927-1937, when the institute was known as the ‘John Innes Horticultural Institution’.

By the time he joined the John Innes, JBS was also famous for his science fiction (especially his best-selling ‘Daedalus: or science and the future (1924))’, and later he achieved something no other John Innes Alumnus has achieved; becoming became a truly public figure, known through his prodigious output of popular science writings, his frequent radio broadcasts, and his involvement in left-wing politics (he was a regular contributor to the Daily Worker in the 1930s- the newspaper of the British Communist Party).

Haldane was passionately committed to science in society, and with his friend the physicist John D Bernal, believed ‘the scientific point of view must come out of the laboratory and be applied to the events of daily life’.

Younger colleagues might not have followed him in his politics, but they learnt from him how to be a public scientist (both good and bad aspects).

Not everyone was a fan of JBS. Cartoonists and poets channelled some of the hostility stirred up by his politics.

In the mathematical camp of genetics, Ronald Fisher and Kenneth Mather were angered by his outbursts of criticism, which they thought were motivated by jealousy. Mather even kept a cartoon and poem poking fun of JBS on his office wall (this is preserved in the Mather collection in the John Innes Archives).

Younger colleagues at the John Innes, especially Cyril Darlington, were dismayed by the stance he initially took when genetics was under attack in the Soviet Union. His politics were distasteful to the John Innes governing council, he was difficult to manage, and he had a troubled relationship with Sir Daniel Hall, the Director.

Sarah Wilmot tells the full story of his career at the John Innes and his dramatic departure in the ‘Haldane at 125’ Special Issue of the Journal of Genetics, based on letters, poems and photographs held in the John Innes Historical Collections- including one newly discovered letter that appears to be his first contact with William Bateson in 1913. JBS’s job was to take over the genetics group at John Innes, which suddenly bereft of their founding Director William Bateson (1861-1926) needed a new leader.

This was JBS’s first genetics post. At the time, he was employed as a Reader in Biochemistry at the University of Cambridge (also a part-time job which he continued to hold in parallel with his new appointment at John Innes), where he was known for his pioneering work on enzymes.

His reputation as a geneticist came from years earlier when as an Oxford student he’d come to Bateson’s attention for his precocious talent, and the presentations he’d contributed to the fledgling Genetical Society meetings.

He was also the author of a series of influential papers in the 1920s on ‘A mathematical theory of natural and artificial selection’.

Some of highlights of his career as a geneticist appear in the Wellcome Trust’s ‘Codebreakers: the Makers of Modern Genetics’ timeline (see 1915, 1924, 1937).

Later, in 1933, he became part-time professor of genetics at University College, London. He continued to work part-time at John Innes after getting the UCL post.

The plant work he supervised at John Innes centred on genetics of the Chinese primrose (Primula sinensis), and his chief collaborator in this was Dorothea de Winton who’d been one of the early research group retrospectively dubbed ‘Bateson’s ladies’.

The availability of detailed genetics data on this plant was a factor in the success of Rose Scott-Moncrieff’s pioneering biochemical work on the anthocyanin pigments. Haldane brought Scott-Moncrieff to John Innes, where she worked with his blessing, but without any practical help from him.

To find out more about Rose Scott-Moncrieff’s contribution to biochemical genetics read this blog.

Haldane’s non-plant publications tackled subjects including rodents and humans, and his FRS election in 1932 acknowledged contributions to no less than five branches of biology.

He served as President of the Genetical Society from 1932 to 1935, and co-edited with Reginald Punnett the Journal of the Genetics (the journal Bateson and Punnett founded in 1910) from 1933. He later took this journal with him to India when he emigrated there in 1957.