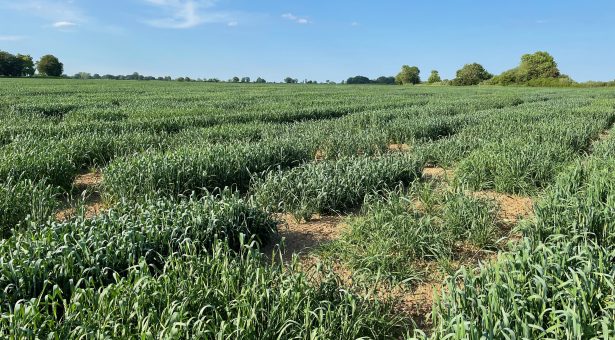 Cereal crops like wheat will have a particularly important role in future food security, yet their worldwide yields have plateaued. With agricultural land at a premium, one of the most urgent global challenges is to increase food production without expanding agricultural land area.

We asked Jay about his work on one way we might be able to do this. Specifically, what does evolutionary biology say about how to design more productive and efficient crops?

“To maximise food production with a given land area, it may seem obvious to plant very dense crops, like we do with modern cereal crops.

A problem with this, however, is that in doing so we are creating intense competition among plants over resources like sunlight, water, and nutrients.

Plants have generally evolved to succeed in competition with their neighbours, so they have traits—like growing tall or having broad leaves—that allow an individual to capture more resources for itself at the expense of others. These competitive traits of plants are harmful to neighbours and ultimately harmful to the productivity of the group.

One solution is to continue to plant dense crops, but to use plants with reduced competitiveness.

The most famous example of this is the dwarfed, “Green Revolution” cereals that were bred to be much shorter than their ancestors. Dwarfed crops are highly productive as dense monocultures, but they are always at risk of being invaded by taller, more competitive plants.

An alternative solution could take advantage of plants’ long-evolved adaptations. My research asks if we can grow highly productive wheat crops made up of fewer large individuals rather than many small individuals packed together. The potential key to this is that many plants grow in a way that will have favoured traits for cooperation rather than competition.

By planting very low-density crops, each plant has the space to grow several genetically-identical (clonal) units, like a wheat plant with several stems (tillers) belonging to the same individual.

In this situation neighbouring stems from the same individual should not compete with each other; on the contrary, they should be highly adapted for living together in a cooperative way—the same way that cells in our bodies appear to work together for a common purpose. I want to know if this potential for cooperation can add up to higher total crop yields.

I am fascinated by complex adaptations, especially the different ways that natural selection can shape how individuals interact in groups.

I have spent most of my postdoctoral career so far studying the theory of social adaptation, using mathematical models to understand when and why traits are used for competition or cooperation.

A recent development in the field of social adaptation has been to appreciate that sociality, with the potential for conflict or cooperation, applies widely to all group-living organisms, including plants.

Early in my career, I contributed to a wider effort to apply social adaptation theory to microbes like bacteria.

Bacteria are group-living (social) organisms that will in some contexts fiercely compete with their group-mates, and in other contexts cooperate with them.

In the same way, plants are social organisms with the potential for both competition and cooperation. I think that discovering more about how plants cooperate is interesting in its own right, and it also has huge implications for improving the efficiency and productivity of crops.

As such, I wanted to apply my expertise to study competition and group productivity in plants—and ultimately to have an impact on agriculture. This required a shift from theoretical evolutionary biology to plant science and agriculture.

Some of my work in this area has found unique evidence for the fundamental trade-off between individual competitiveness and group productivity in plants, and I hope this will help to develop the field of evolutionary agro-ecology (or Darwinian agriculture).

My work now is examining the potential benefits of clonality, using large-scale field trials and the global diversity of wheat, with the aim of informing new strategies for maximising crop productivity.

Ever since I started thinking seriously about a career, I wanted to do something about protecting natural environments.

At first, I thought I might be a park warden or something similar. But when studying biology at university I became more interested in evolutionary biology and problems that were more philosophical than practical.

I am now happy to do research that uses evolutionary thinking to address both fundamental questions and practical problems like sustainable food production.

I find it inspiring that sustainable agriculture is in fact crucial for protecting natural environments, especially if we can learn to efficiently produce food with as little land as possible.”