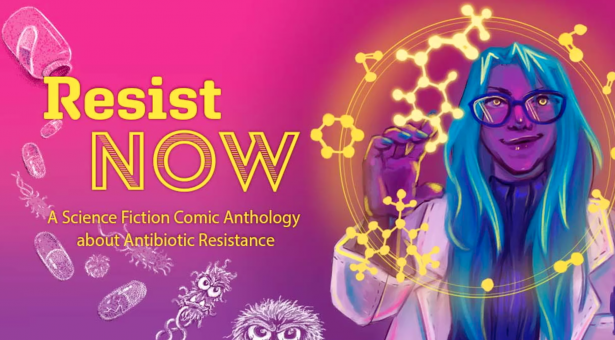 Alongside his PhD Jacob and Hutchings lab partner Katie Noble have teamed up with a team of artists and scientists from around the UK on a comic book designed to communicate their work to a new audience.

We spoke to Jacob about the comic, his research and what inspired him to consider a career in science.

“Science communication often requires a lot of information to be conveyed in a relatively small amount of time and I’ve always found turning my work into a story helps me to communicate my research more clearly.

Comics are a great way of telling a story in an accessible way, that doesn’t involve huge amounts of text; you can get across lots of detail by putting in the images rather than writing it all out. Comics also can get into the hands of people who wouldn’t normally engage with other forms of sci-comms such as papers or outreach events; not everyone wants to chat to us at Norwich Science Festival for example, but they might pick up a comic and give it a read.

So, I thought an anthology containing seven research stories, each produced by a different scientist and artist combo from around the UK, was a really exciting project to get involved with.

I’m a PhD candidate in the Hutchings Lab, where I study the bacteria that live in leafcutter ant nests.

Leafcutter ants chop up plant material from their home in the Amazon rainforest and take it back to their colony, where they use it as a sort of fertiliser to grow a fungus, which they then eat.

Just as human farmers use pesticides and herbicides to try and prevent or control disease outbreaks, these ant farmers need antibiotics and antifungals to protect their fungus crop from infections.

My research looks at the bacteria the ants grow on their chests and the chemicals these bacteria produce. The hope is I can discover a new antibiotic that hasn’t been found before which could – eventually – be used to treat infections in humans

As more bacteria become resistant to the drugs we use to treat infections, we are going to need new antibiotics. Looking for new antibiotics in usual places, like in leafcutter ant nests, means we’re more likely to find something novel, that might treat drug-resistant infections.

As one of the scientists involved in the story, it’s been my job to make sure we’re as accurate as possible and the storyline is realistic, while still making sure it’s understandable to the wider public and we can still have fun in our sci-fi setting.

To that end, Nicky and I explored ways to keep the key features of the ants correct, even in their anthropomorphised form, such as the antibiotic-producing actinomycete bacteria living on the chest carapace of the ant.

We’re hopeful that the printed book will be available in November 2022 with a digital version available next summer.

It wasn’t until I was later into my teenage years did doing a PhD and science as a job become something I was actually aiming for.

At first that came in the form of wanting to be a physicist, as I was (and am still) fascinated by space – it’s scale and all the possibilities – but over time I found chemistry and biology to be much more in my areas of interest. I think my long-standing interest in how life works, how that goes wrong and how we can fix it trumped physics in the end.