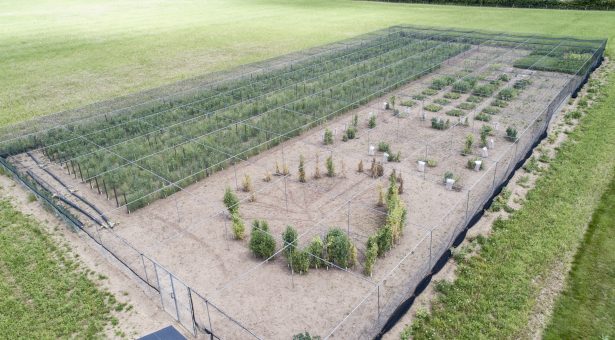 They are packed with protein and other nutrients, good for our soil and, potentially, a source of biodegradable packaging to replace plastic; so why don’t we grow more peas?

“It’s hard to remember a time when I thought ‘pea’ described a single type of plant or seed but that is how most people think of it,” says Professor Claire Domoney, a Group Leader at the John Innes Centre.

Professor Domoney became aware of the genetic potential of pea when she arrived at the John Innes Centre and saw the lines available at the Germplasm Resources Unit (GRU), a national collection of seeds used by plant breeders and academics world-wide. The GRU now curates 3,500 lines of pea collected over decades from around the world.

“The genetic variation in peas was a huge surprise. Once you start looking at seed biology in any depth, you realise that the amount of variation in our seed store is just immense, and most of this is natural variation,” says Professor Domoney. “For people working on many crops, the natural variation available to them is quite narrow, so the only way they can generate variation is through mutagenesis. That is their starting point. With pea, we had that there already. I still see people who are amazed and really fired up by the potential that this natural variation provides.”

It’s not just academics and breeders hunting for useful traits who think peas are interesting. More consumers are catching on to pea as an alternative source of protein, one with less environmental impact than soya and meat.

Proponents say pea is better suited to perform in UK agriculture than soya and contains fewer allergens and anti-nutritional factors which reduce nutrient availability during digestion.

“Developing markets, particularly those appealing to the growing vegan market, avoid soya because of negative environmental associations such as the destruction of rainforests and the use of chemicals such as hexane to extract protein,” says Professor Domoney.

Nutritionally, pea protein is a viable, quality alternative to soya with companies such as the Norfolk-based Hodmedods expanding its range of pea products, drawing in some cases on genetic material from the GRU.

The search for sustainably produced protein has stimulated most interest in the crop recently, but there are other reasons why pea could become a pillar of the future of food in many countries.

A European Union-funded project involving the John Innes Centre explored uses of pea starch in a range of environmental and industrial ways. These included biodegradable food wrapping to replace plastics and agricultural mulches in fields to warm up the soil. Pea starches can even be used for wound dressings, as they can create a breathable membrane to cover wounds and help them heal.

This research wasn’t deemed economically viable at the time, but in the decade since the work was carried out public attitudes are changing. Environmental documentaries such as Blue Planet II presented by Sir David Attenborough have highlighted to more people the tragic impact of eight million tons of plastic that ends up in the oceans every year.

As a legume, pea has a major environmental benefit – it can harvest, or ‘fix’, nitrogen from the air with the help of symbiotic bacteria. This means that it can be grown without the need for inorganic sources of nitrogen which have a damaging impact on biodiversity and contribute to greenhouse gas emissions.

Nearly half of the protein in the human diet comes from plants grown using resource-intensive artificial nitrogen fertiliser. Using a legume as part of a rotation reduces this unsustainable dependency and it also means that a residue of nitrogen remains in the soil for the follow-on crop. Recent research by the University of Oxford has shown that adding a legume to soils ‘conditioned’ by other plants has a large impact on the biodiversity of soil microbiota.

These environmental benefits add to the strong case for growing pea. So why have farmers been reluctant to include it when once it was a staple in rotations that have now become more limited to wheat and oilseed rape?

“As prices for wheat and rape have shot up the demand for legumes has dropped,” says Professor Domoney. “The folklore is that yield instability is greater in pulse crops: I don’t see the evidence for that, but there is evidence that skill is needed to grow a legume crop well and to maximise its performance. I suspect that things are starting to change, as oilseed rape is subject to an increase in insect attacks with the ban on neonicotinoids, including pressure from attack by cabbage stem flea beetle.

“By adding legumes back to rotations, you would get a greater recovery of soil nutrients and provide benefit from the nitrogen fixation to the second wheat crop.”

Current research at the John Innes Centre is exploring ways of changing the protein profile in pea seeds. For example, removing inhibitors and other proteins that interfere with digestion or are functionally inferior. This will prove that you can make major changes to composition without impacting on plant and seed performance in the field.

From a commercial point of view being able to create ‘designer peas’ makes the crop even more interesting, with the milk substitute market another potential outlet.

As food, as animal feed, as an alternative for single-use plastic, this versatile crop could prove to be a key piece of the solution to major environmental problems.