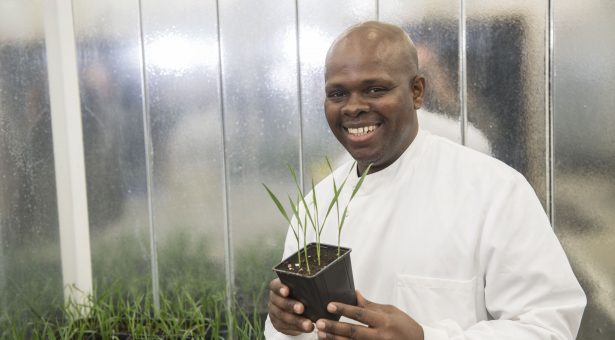 PhD student Ngoni Kangara’s research focuses on stem rust, a major global disease of bread wheat and an ancient foe of the farmer.

Early influences set him on a career fighting this problematic pathogen.

Working as an agronomist and project manager for an NGO whose aim was to mitigate the effects of drought and improve food security of rural farmers, Ngoni witnessed first-hand the devastating impact of viral disease on sweet potato and cassava.

During his 11 years in this role, he used a technique called plant tissue culture to regenerate healthy plant material from a few cells taken from uninfected regions in the buds of plants. This ‘clean’ material was then distributed to farmers, and used to improve yield. Farmers saw leaps in productivity, jumping from three tonnes per hectare up to 30 tonnes or more.

Globally, crop diseases cause annual yield losses of between 21% and 30%. However, these global averages mask the devastating losses at regional levels which can reach 100%. The sudden emergence of resistance-breaking pathogen strains, or when farmers do not have access to resistant cultivars or pesticides, can lead to crop failure, severe food shortages and even civil unrest.

The recurrence of wheat stem rust disease across much of Africa, the Middle East and parts of Europe has had a profound impact on crop yields. In 1999, a new variant of its causative agent, the wheat stem rust fungus (Puccinia graminis f. sp. tritici) was identified in Uganda. The disease spread through much of East Africa causing widespread crop losses. New strains evolved, and these have overcome previously effective stem rust resistance (Sr) genes. Yield losses attributed to wheat stem rust are estimated to be six million tonnes per annum, equivalent to $1 billion in value. This amount of grain can produce enough flour to make at least seven billion loaves of bread – enough to feed the whole of Africa for 20 days.

The continued growth of the global population makes it necessary to breed crops with higher yields, but also to prevent yield losses due to crop disease and other factors. Breeding for pathogen resistance can provide a way to protect crop yields and reduce reliance on pesticides. It takes several years to transfer one Sr gene into a cultivar. Sr genes encode immune receptor proteins that monitor the plant cell environment to detect the invasion of the wheat stem rust fungus. During the infection process, the fungus secretes proteins called effectors into the wheat cells to create a hospitable environment to grow in and reproduce.

Ngoni tells us more about his PhD: “The research seeks to further the work of John Innes Centre, The Sainsbury Laboratory and CSIRO, who contributed by cloning the Sr genes, for use in the multi-Sr gene stack developed by an international collaboration, led by CSIRO in Canberra. My PhD is funded by the John Innes Centre Science for Africa programme and a Marie Sklodowska-Curie Fellowship.”

Producing the multi-SR gene stack, transferring five unique Sr genes at once into a single cultivar of wheat using a genetic engineering technique was a huge task. Field trials of the cultivar showed that the genes exhibited immunity to stem rust. Ngoni, who works in Dr Brande Wulff’s group explains what his PhD aims to achieve: “When genes are transferred into a cultivar it is essential to test if the genes function as they should. If only one, or a few, of the genes are functional, then resistance-breaking strains of the fungus can evolve rapidly, undoing the work of putting the genes into the cultivar.

“I am a strong advocate for using genetic engineering to tackle the many problems that rural and commercial farmers face in my country and around the world,” Ngoni explains. “And I look forward to collaborating with other scientists, and policy-makers to provide evidence that leads to a change in GM regulations.”

Ngoni first became interested in crop protection while studying at the University of Zimbabwe. “The stimulating lectures of Dr Julia Sibiya and Dr Irene Koomen inspired my career path. Now I look forward to pursuing a career in teaching and research, passing on the skills I have acquired during my studies to a new generation of scientists in Zimbabwe.”