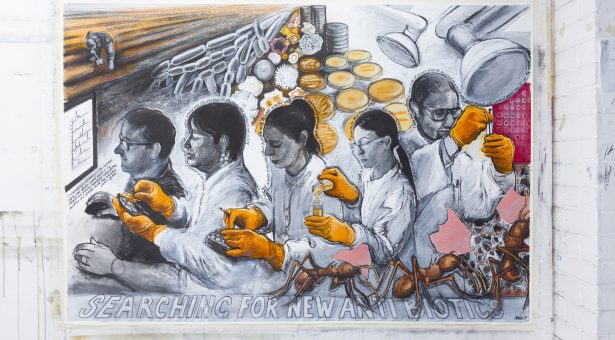 With her project, ‘Lives in Science’, Malca Schotten wanted to inspire young people by telling stories about science through its scientists, finding out who they are, personally and through their practice.

“This project has been extraordinary and challenging: one of the biggest challenges I have faced in my artistic career.

As an artist, I am inspired and driven by my love of drawing and my passion to reflect what matters in our lives through subjects that raise public awareness of key issues. By exhibiting thought-provoking projects in public spaces I hope to reach a wider audience and bring art into the public domain.

Lives in Science was a different sort of project for me, and I had come out of a dark place with a sick child since 2013 (thankfully, he is now fine and studying at Leeds College of Music). My last project was also in 2013, and while I never stopped drawing altogether there have been fallow periods. Working on this new and ambitious project, I was heading straight into a world that, for me and many others, is pretty intimidating.

When I first arrived at the John Innes Centre, I was both excited and terrified. With every project I do, my normal and rather unfortunate first response is to have a small meltdown, panic and tell myself I can’t draw. My way of dealing with this is to face these demons head-on in an intense period of drawing in some form.

The time I had to complete this project was very tight. It took me almost two years to apply and receive funding for this project (partly because I am dyslexic and grammar isn’t my forte. ‘But this article is so beautifully written,’ I hear you say…). Once funding was finally confirmed in March 2017, I only had six months to learn about the science and scientists, to draw them, and create the pieces.

After talking to scientists in many departments I drew up a list of six teams to become large, narrative, full-colour drawings for exhibition at the John Innes Centre’s ‘50 Years in Norwich’ open day on 16 September 2017. The drawings would then travel to Norwich Science Festival with a brochure, postcards and blog following the story of the project; I had lots to do.

There would be many frustrating occasions in which I would arrive, with sketch book, camera and audio recorder hoping to catch some science action and be told, ‘oh this is a really busy time; you won’t find anyone now’, or ‘this is a really quiet time, they are mostly on holiday’ or ‘this is conference season, they are all away’. It was like fishing in the dark – I didn’t have a clue where I was, what I was dealing with and whether I would even get a bite. Drawing scientists at work was proving to be a massive challenge.

If that golden opportunity – to draw a scientist – did offer itself, I would often find myself sweating and my hand shaking. When your head is telling you that you can’t do something it has the power to disable you from the task in-hand. The thought translates like an electric charge from brain straight through to the finger tips, and can make drawing very difficult. The trick is to hang on for dear life until the joy of drawing kicks in again.

Timing in science is critical, and as a result, when a scientist tells you they will meet you in the lab, it can quite often be a movable feast. When they are there, their heads are often bent over their work or they are jumping from one bench to the next. Talking was tricky; the concentration on their faces impossible to sketch – a major problem owing to the restricted time. Reluctantly, I found a solution in swapping my sketchbook for a camera to capture the energetic and assiduous activity.

My experience at the John Innes Centre was not at all what I expected, not that I’m even sure what that was. I was so pleasantly surprised by how very normal and approachable the scientists were. There were a few moments in which, at last, I found my comfort zone. Drawing Mike Ambrose was a sheer delight. As I shadowed him moving through the pea enclosure on a sweltering summer day, I found a happy place, Mike striking an assured pose and chatting about his life – perfect.

I have come out of this experience with my first real understanding of areas of science and its people, which I feel is a great achievement. Looking back, with more time and the freedom to work with my sketch book, I feel I could have really got under the skin of a life in science. So far, I feel I have only skimmed the surface.

As with most artists, I will always be critical of what I have done. In this whirlwind journey, I have met some extraordinary people from all over the world working together in a common cause for improving world health and food production. The rich diversity of cultures, language and learning is a distinct feature at the John Innes Centre, and it is one to be celebrated.”