Bridge-building is a new preoccupation in the career of Professor George Lomonossoff, a virologist with a 40-year career in academic science; not just any old bridge: this one spans the Valley of Death

Professor Lomonossoff says “The ‘Valley of Death’ has been spoken about since the biotech boom in the 80s and 90s, which saw the creation of a plethora of small start-ups – like the dot-com bubble. They didn’t fail because the science was bad. But we couldn’t scale it up. Investors want evidence if they are going to build a £100 million facility.”

Early in 2017, the Norwich Research Park saw a significant first step in the right direction, with the opening of what Professor Lomonossoff playfully calls the “Facility of Dreams”. Leaf Expression Systems is a John Innes Centre spin-out company at the Norwich Research Park, jointly owned by Plant Bioscience Limited (PBL) and the Biotechnology and Biological Sciences Research Council (BBSRC).

The company is an intermediate-scale facility, a transition point between academic discovery on one side of the Valley and major investment on the other. The facility uses ‘Hypertrans’ transient expression technology developed in the Lomonossoff lab – a leafy production line using Nicotiana benthamiana plants, a relative of tobacco.

Each plant represents a mini-green factory, its metabolism hijacked by soil bacterium, Agrobacterium tumefaciens, containing the necessary genetic information to produce proteins or secondary metabolites for pharmaceutical products. Batches of up to 42 plants are vacuuminfiltrated, then the products they express are purified in sufficient quantities to become vaccines and drug candidates which can be taken to commercial collaborators.

Advocates of using plants in this way say it’s cheaper (plants need only sunlight, carbon dioxide and water to grow) and also quicker than established expression systems such as yeast, animal cells and bacteria.

A significant licensee of the Hypertrans technology is Canadian company Medicago. In North Carolina it has built a facility which covers the area of half a football field and houses 40,000 plants in a transient expression factory.

Medicago has demonstrated it can manufacture the virus-like particles for an avian flu vaccine, reducing production times for ten million doses from nine months to 30 days

It is using the plants to develop a winter flu vaccine, with phase-three trials involving 10,000 people underway.

Another advantage of using plants is scale. The Hypertrans system enables labs, such as Professor Lomonossoff’s working with proteins and that of Professor Anne Osbourn working with secondary metabolites, to produce scaled-up quantities of products. “Ten grams of proteins equates to about a million doses of vaccines, so it is not trivial,” says Professor Lomonossoff. “It’s a completely different scale to that of the lab. You need these quantities for consistency, to demonstrate quality assurance and to be able to do reasonable-scale trials in animals for preclinical studies.”

Like many of the best science stories, this all came about with one of those “lucky” accidents. Ten years ago, Frank Sainsbury, a postgraduate student working in the Lomonossoff lab, discovered a way of speeding up the clunky process of cloning into the expression vectors used in plants. By modifying the genetic instructions, Sainsbury discovered he could not only simplify the cloning process but, unexpectedly, could produce protein with a tenfold output increase.

Professor Lomonossoff is happy to accept that a fortunate process set things in motion. But such fortune needs to be recognised for its significance and opportunities. The John Innes Centre team worked with PBL to get the Hypertrans technology patented.

They improved the use of vectors and shared innovations freely with academic collaborators to raise the international profile of the technology. The turning point, says Professor Lomonossoff, came in 2012 when he and Sainsbury won the overall BBSRC Innovator of the Year Award. “This gave me the confidence to say, ‘We really do need a way of scaling this up,’” he said. “We used that to knock on doors.”

The result was the Leaf Expression Systems building, which was funded with a £5m grant and opened in January 2017. So what is the marker for success? “Success would be in five years’ time, people going to get their flu vaccination and it would have been made in plants,” says Professor Lomonossoff. “We want investors to do their research and development at Leaf Expression Systems and go and make their own facility, whether it’s for small molecules or proteins. Leaf is not about commercial production, it’s translational, it’s the bridge.”

Reasons to be cheerful

One of the most exciting uses of breakthrough technology lies in creating a vaccine that would eradicate the age-old disease, polio.

In 2013 Professor Lomonossoff was asked to join a WHO consortium to investigate if his technique of using virus-like particles (VLPs) in plants would work as a way of producing a new polio vaccine. VLPs are engineered with the nucleic acid removed so they are not pathogenic – but contain enough material to stimulate an immune response.

The collaboration was widely acclaimed when it made a plant-produced polio vaccine effective against Type 3 poliovirus in August 2017. It is hoped a vaccine produced in plants will be available in the next few years.

Polio was a global scourge until the middle of the last century. Well-known public figures affected by the virus included the singer Ian Dury, whose hit song Reasons to Be Cheerful was chosen by Professor Lomonossoff as one of his favourites on a local BBC radio show.

Effective vaccines have kept global levels of polio down to a few hundred. The vaccine currently uses a weakened version of the live virus which can cause poliomyelitis.

Recent work from the team of Professor Anne Osbourn has highlighted the role of the Hypertrans expression systems as part of a “step change” in the production of valuable small molecules with a host of medical, agricultural and industrial uses.

The Osbourn lab investigates triterpenes, natural products that are produced by plants and have a wide range of uses as drugs, agrochemicals, surfactants, and food and drink additives. The lab uses advanced genome mining approaches to scour the “dark matter” of plant genomes in order to search for new natural product pathways.

This has been greatly facilitated by the discovery, pioneered by the Osbourn laboratory, that the genes for many plant natural product pathways are organised in biosynthetic gene clusters, so making new pathways easier to find.

Alongside the Hypertrans technology, which allows valuable genes to be expressed in plants to deliver gram-scale amounts of molecules within weeks, Professor Osbourn says these advances represent a revolution for natural product pathway discovery and engineering, enabling the dark matter of plant genomes to be harnessed for medicinal, agricultural and industrial applications.

“Plant expression technology represents a whole new step change that could leapfrog microbial systems. We have shown that we can make gram-scale amounts of novel products rapidly. We are accessing chemistry that hasn’t been accessed before. 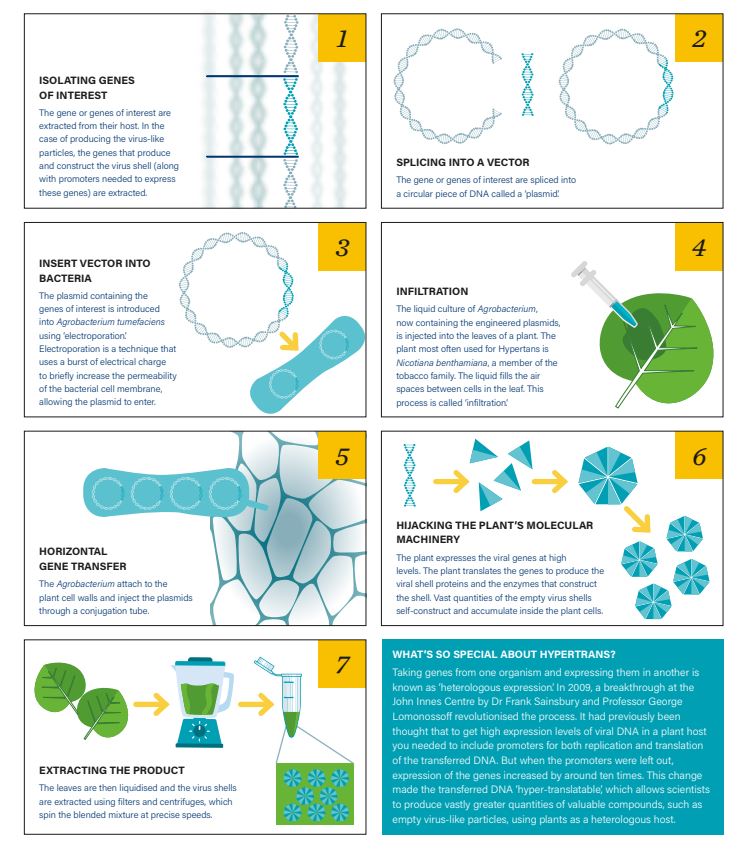 What’s so special about Hypertrans?

Taking genes from one organism and expressing them in another is known as ‘heterologous expression’. In 2009, a breakthrough at the John Innes Centre by Dr Frank Sainsbury and Professor George Lomonossoff revolutionised the process.

It had previously been thought that to get high expression levels of viral DNA in a plant host you needed to include promoters for both replication and translation of the transferred DNA. But when the promoters were left out, expression of the genes increased by around 10x.

This change made the transferred DNA ‘hyper-translatable’, which allows scientists to produce vastly greater quantities of valuable compounds, such as empty virus-like particles, using plants as a heterologous host.