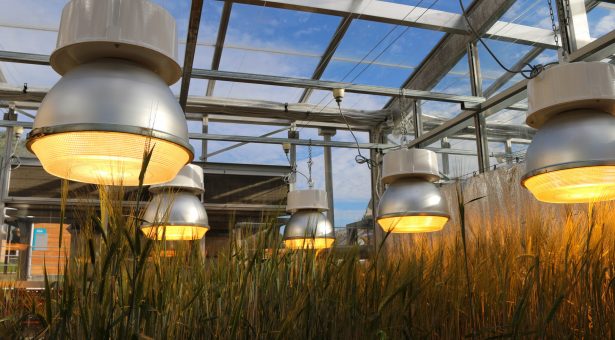 On 1 January 2018, Dr Brande Wulff was away from it all, walking with family in the mountains of Spain.

The new year dawned three days later when he returned to a cascade of emails from around the world.

While he was away, a research paper, on which he was a lead author, was published in the journal Nature Plants. It was about speed breeding, which Dr Wul­ff, a wheat scientist at the John Innes Centre, is pioneering alongside colleagues in Australia. People, and lots of them from all walks of life – academics, journalists, crop breeders, general folk – wanted to hear more about the method for growing plants faster.

“I was overwhelmed,” recalls Dr Wul­ff. “I have never in my life experienced such a response to a published piece of work – so many people wanted to ask questions about speed breeding.”

Some wanted to check the details – about the type of optimised LED lighting used in place of sodium vapour lamps, or the intensive day length regimes of up to 22 hours, or the temperatures or CO2 levels used. These conditions, when taken together, coax wheat plants and other crops on the Norwich Research Park to reach adulthood in eight weeks – two-and-a-half times faster than before.

Others were intrigued that a technology inspired by space travel and NASA experiments to grow crops extra-terrestrially was back on Earth as a potential answer to feeding the world. “I guess one reason for its popularity is that the technology is very simple but the result is very graphic,” says Dr Wul­ff. “You see a wheat plant, which is small and puny at five-and-a-half weeks, and then you look at the plant next to it grown under speed breeding conditions. It’s big and luscious and green and has lots of seed. The di­fference is remarkable and it captures the imagination,” he adds.

While speed breeding is a research platform that promises to revolutionise the development of a whole range of crops, its arrival has been most closely associated with wheat. Dr Wulff­ believes that the status of the iconic crop – which has delivered the daily bread of civilisations – has much to do with making the story so popular.

“The public understand the connection with wheat and bread,” he argues. Bread is ubiquitous in our diet. Dr Cristobal Uauy (also a wheat researcher at the John Innes Centre) has calculated that the average person eats 15 wheat plants a day. Wheat is said to have built the pyramids in Egypt, because it provided the daily bread for the workers for over 30 years. Wheat is a crop of antiquity, domesticated 10-12 thousand years ago. It is set to play a major part in meeting the challenges of a more populated future.

“Wheat provides 20 per cent of the calories we consume and about 20 per cent of the protein we need. It is the most widely grown of any crop. People can instinctively understand that if we can improve wheat production and do it quickly, we have a chance of feeding a growing population,” says Dr Wul­ff.

The International Wheat Initiative has identified many key traits that must be improved to achieve the 1.6% yield increase that is predicted to be needed to help feed a global population of 9.6 billion people by 2050. To do this, many crops need to be more nutritious, higher yielding, more disease resistant and climate change resilient.

These improvements can only be achieved through fundamental research, and ensuring this understanding is translated into the staple crops we rely on. Crop improvements take many years using traditional breeding methods, and it can be decades in complex crops like wheat.

Speed breeding means it is possible to grow six generations of wheat per year instead of two, and there are plans go even faster.

In addition to global outcomes, there is a strong domestic call for the UK to quickly develop varieties of crops that can be grown in a range of environments, including in vertical farms and indoors.

“A generation ago we were producing 80 per cent of the food we consume in the UK,” says Dr Wul­ff. “Today it is only 60% and within half a generation that will fall to 50%. It means that we are vulnerable, because we depend on other countries for our food.”

Despite these successes, speed breeding is still undergoing intensive revisions. There is a low-cost desktop version of the technology in development, and Dr Wulff­ and his team are currently planning speed breeding 3.0, which involves using enhanced LED lighting, atmospheric controls and hydroponics.

There is even a record bid in the o­ffing with the team modelling hydroponic systems trying to beat the current best of eight weeks for a generation of wheat. While a record push may seem like a frivolous use of time, it promises to create more awareness of the technology; a serious stunt with a purpose. By pushing the limits of the technology, the team will learn valuable lessons that can then be ploughed back into improvements for the next speed breeding platform.

“It’s a technology that is very easy to replicate around the world,” says Dr Wulff. “I think it will be adopted very quickly, and that will contribute to the impact. I would like to think that in 10 years from now you could walk into a field and point to plants whose attributes and traits were developed using this technology.”

Digging into wheat’s wild past

Essentially three plants in one, common wheat, or bread wheat, is a crop so genetically complex that for many years understanding it at a molecular level has only been possible via fundamental works on less complicated model plants. Discoveries using these model species have then been translated to improvements in wheat.

Advances in DNA sequence analysis of the wheat genome have been accompanied by a suite of genomic research and breeding tools, which has enabled an exciting new dawn in the study of wheat.

Alongside speed breeding, the John Innes Centre has led an international consortium to develop a genomic directory called Open Wild Wheat, which will allow researchers and breeders to scan the genomes of wild relatives of modern wheat to recover disease resistance genes lost in the process of domestication.

Meanwhile, speed cloning allows researchers to identify useful genes such as one that controls disease resistance by their genetic ‘address’ and then cloning them for introduction into elite varieties.

“Wheat is an exciting place, we are at a watershed moment,” says Dr Brande Wulff. “There is going to be an exponential growth in the identification of genes associated with discrete traits,” he adds