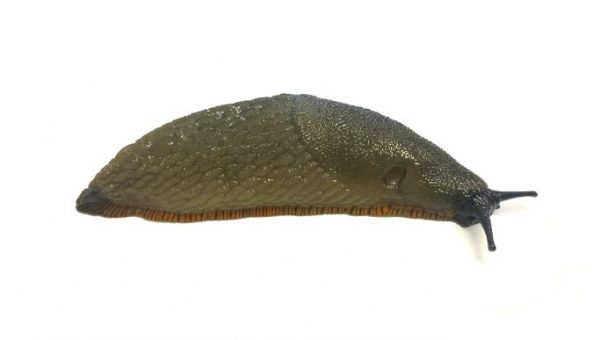 Colour can be extremely variable, even within individual populations. Most commonly it is grey or orange, but extreme morphs of black and almost white are rarely recorded.

The foot fringe is virtually always bright orange and is strongly lineolated.

The sole is paler than the body sides, often with a distinctive orange tinge, particularly towards the head. Lines extending from the fringe can commonly be observed on the sole and can sometimes stretch almost to its centre.

Tentacles and head are almost always darker than the rest of the slug. Mucus is thick, sticky and colourless. Tubercles are large, but can often appear flattened. Juveniles can be strongly banded and are often brighter in colour.

This species is known to feed on live plant material, however it has a extensive omnivorous diet and more readily feeds on decaying vegetation and food waste.

Adults of this species can be almost impossible to accurately distinguish from both Arion ater and Arion vulgaris; this is not helped by the fact that it is believed the three species may be able to hybridism. This species usually has a lighter sole and body, and brighter coloured foot fringe than the other two species.

A. rufus also often appears chunkier and slightly less elongate; however these are by no means full-proof distinctions and dissection is often the only way to isolate this species.