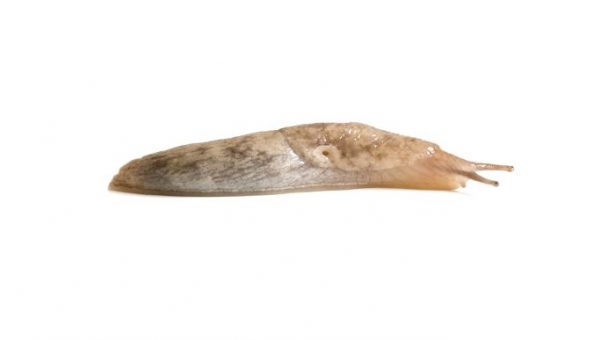 Colour is exceedingly variable and ranges from bright white to almost entirely black; it is most commonly pale buff with darker blotches.

The tail is usually longer than the mantle and the keel short and distinct.

The sole is pale, commonly with a visible darkened central strip of gut contents.

The head and tentacles are dark. Mucus often appears milky, especially if the slug is roughly handled. Juveniles appear similar to adults.

Almost ubiquitous, found in all open habitats, except dune systems and high mountains.

The most commonly cited pest species in the UK, and one of the most serious global plant pests.

It is a particular problem for commercial growers, as they can reach huge numbers on cultivated land.

The grey field slug is normally quite distinctive from all other closely related species. Its blotched appearance and milky mucus should be enough to reliably separate it.

Individuals lacking blotched patternation can be confused with the Arctic Field Slug, Deroceras agreste; in these cases dissection may be required.