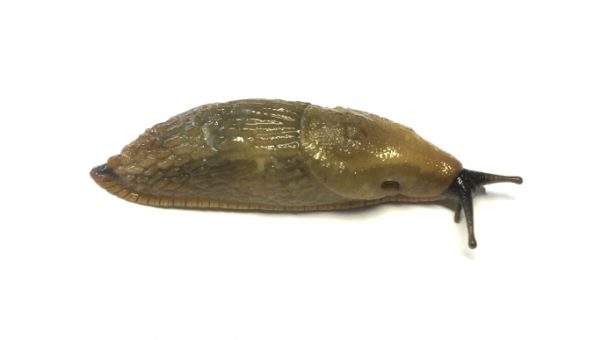 Colour can be extremely variable, even within populations; most commonly pale brown, but can range from cream to black. It is a heavily built species with distinctive coarse tubercles.

It has dark brown-black tentacles and a pale sole which is often tinged greenish.

The mucus is usually colourless, but may be tinged yellow.

The young have distinctive dark lateral bands which often persist, but are rarely as pronounced in adults.

Most often found in gardens and other urban areas.  However can be present in a variety of habitats, including; woodlands, moorlands and grasslands.

Known to build up to big numbers in gardens and allotments, however feeding preferences are still not well understood.

Probably one of the most distinctive of the Arion species. It can be reliably disguised by its often green tinted sole, its tendency to remain banded as an adult and its coarse tubercles.

Between the lateral mantle bands of an adult A. flagellus there are usually fewer than 9-10 tubercles; whereas in all other similarly sized Arion species there are more than 10.