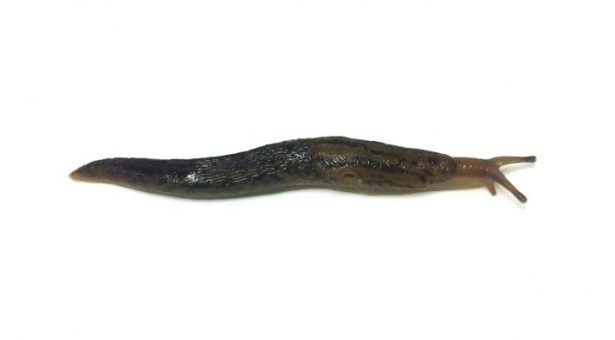 Base body colour ranges from grey to brown usually with a slight pinkish tinge.

The body is ordinarily marked with prominent dark lines, spots and blotches. Three distinctive bands are often clearly visible on the mantle. Lateral bands are also often found high on the body and stretch from the mantle to the tail tip.

The keel is indistinct and short.

The sole is uniformly pale and the mucus colourless.

Associated with most disturbed sites, including gardens and allotments. Often found taking shelter in compost bins or under logs or plant pots.

Sometimes confused with Lehmannia marginata, however the lack of a central pale stripe and more distinct banded patternation present with A. nyctelius separates it.

It may also be mistaken for a young Limax maximus, which has a visible keel, is plumper bodied and has longer tentacles relative to its size.

This species is very hard to accurately distinguish from Ambigolimax valentianus, which is often larger, paler and has a less dense coverage of markings; however dissection is required to distinguish them with confidence.