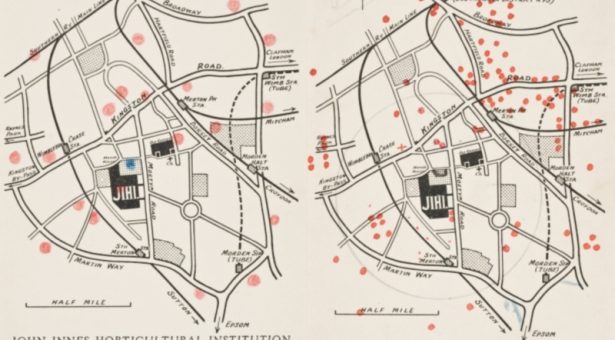 The beginning of World War 2 in 1939 caused a decline in agricultural exports from America to England and Europe as more and more supply ships were sunk by German U-boats.

As a consequence, the emphasis of research at the John Innes Institute was re-directed towards the immediate problems of food supply.

C.D. Darlington, who took up directorship of the John Innes Institute that year, encouraged staff to focus on problems of seed production at home, so growers would not need to rely on imported seeds.

This meant that the majority of the genetics research, such as pea research, was put on hold. Instead, research on food crops – such as onions, tomatoes, leeks, carrots, beet, cabbages and raising seedling vegetables – took place.

During this period, the Institution experienced a decline in staff numbers; nearly all the student gardeners and several members of the permanent garden staff were enlisted in military service.

Despite replacing staff with boys and women, the garden staff numbers shrunk from 33 in 1939 to just 22 by 1940. The depleted workforce also had air-raid protection and fire watch duties. The reduction in staff numbers meant that the usual work of the Institution was no longer possible.

Darlington had already made it clear what he thought of ‘Bateson’s ladies’, and was not Pellew’s biggest fan. In 1941, Pellew and de Winton were forced to take ‘voluntary retirement’, marking the end of the early era of pea research at the John Innes.

Give peas a chance

It was not until the 1960s when the pea programme was reintroduced.

At this time, a lot of plant breeding programmes were being transferred from the John Innes Institute to other institutes. Therefore, Kenneth Dodds, the acting head of the Applied Genetics Department, needed to find a plant unique to his department to settle its future

Based on the previous work carried out by Pellew, de Winton and Bateson, Dodds selected pea and kickstarted the next generation of John Innes Centre pea research.