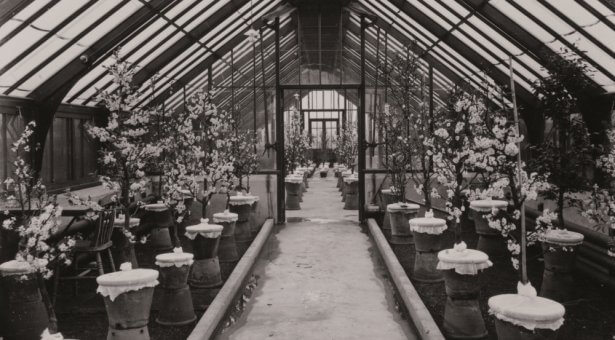 2017 marks 50 years since the John Innes Institute moved from Bayfordbury near Hertford to its new home, on Colney Lane in south Norwich.

The institute will mark the anniversary at a number of events during the year.

The John Innes Institute, which became the John Innes Centre in 1994, has grown into a global centre of excellence in plant and microbial science, with a remarkable output of ground-breaking research and economic impact. A report by Brookdale Consulting in 2013 estimated that John Innes Centre wheat research alone delivers an annual contribution to the UK economy of £400 million and £8.7 billion to the global economy.

Examples of cutting-edge research at the John Innes Centre include:

Professor George Lomonossoff and Dr Frank Sainsbury’s new, fast and efficient plant production platform for valuable proteins can be used to develop new vaccines and diagnostics. Professor Lomonossoff is currently developing a new polio vaccine and a diagnostic for the Zika virus.

The identification of a potential new antibiotic that is effective against a number of infectious bacteria, including MRSA. Professor Matt Hutchings from UEA and Professor Barrie Wilkinson at the John Innes Centre recently identified a new molecule with potential as an antibiotic: it can kill bacteria that cause life-threatening infections, including MRSA and VRE. The molecule is produced by bacteria that live on tropical plant-dwelling ants.

Dr Judith Irwin has developed a new line of climate resilient, fast-growing sprouting broccoli which could double the amount of the crop that can be produced from a field in one season. It can be harvested four times per season in protected conditions.

Dr Diane Saunders and colleagues have developed methods to rapidly detect and characterize new and re-emerging crop diseases. They analyse the genetic make-up of fungal diseases of wheat from samples collected all over the world to assess the population structure of these pathogens directly from infected field samples, accelerating the response time of scientists and farmers to these diseases.

The institute’s location in south Norwich has enabled it to grow. It now houses world class scientific equipment and employs over 300 staff. The John Innes Centre’s research facilities and its reputation for excellence have meant that Norwich has become home to some of the best plant and microbial scientists in the world.

“We are proud to call Norwich our home. The John Innes Centre has gained so much from being based in Norwich. Not only from the fantastic collaborations with other research institutes and the UEA on the Norwich Research Park, but also from the many relationships we have forged over time with local communities, businesses, schools and colleges in the region. Our world leading status means we are able to attract the best scientists from all over the globe to live and work here. We have 41 different nationalities of staff at the John Innes Centre who have contributed to the richness and diversity of Norwich and the region.”

“The John Innes Centre has taken an active role in the region, enthusing primary and secondary school children about the wonders of science and encouraging them to consider a career in science, technology, engineering, maths and medicine (STEMM).”

He added:  “This year is a special year and we aim to mark it through our involvement in a variety of events in the city centre, and also by inviting the public to come and visit us and learn about our science during a public open day in September.”

Staff at the John Innes Centre will also mark the anniversary by taking part in the Lord Mayor’s procession in July and sharing our science with the public during the Norwich Science Festival in October.

Further events are being planned throughout the year. Stay tuned for more details over coming weeks and months.