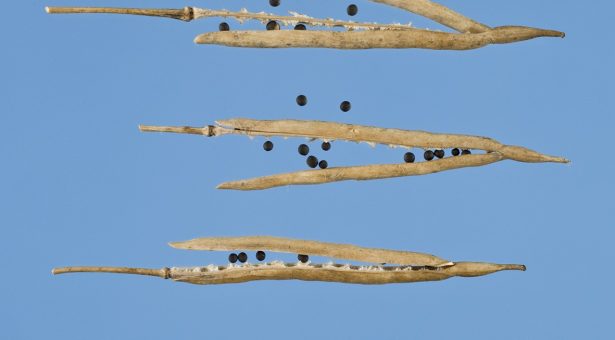 Breeding temperature-resilient crops is an “achievable dream” in one of the most important species of commercially-cultivated plants, according to a new study.

The vision of crop improvement in the face of climate change is outlined in research by the John Innes Centre which establishes a genetic link between increased temperature and the problem of “pod shatter” (premature seed dispersal) in oilseed rape.

Research by the team led by Dr Vinod Kumar and Professor Lars Østergaard, reveals that pod shatter is enhanced at higher temperature across diverse species in the Brassicaceae family which also includes cauliflower, broccoli and kale.

This new understanding brings a step closer the prospect of creating crops that are better adapted to warmer temperatures.

Dr Vinod Kumar, a co-author of the paper explained the significance of the findings: “It’s almost as if there is a thermostat that controls seed dispersal, or pod shatter. As we learn how it works, we could in the future ‘rewire’ it so seed dispersal does not happen at the same pace at higher temperatures

“This piece of the puzzle, coupled with the use of advanced genetic tools means that developing temperature-resilient crops becomes an achievable dream.”

Controlling seed dispersal, or “pod shatter” is a major issue for farmers of oilseed rape worldwide, who lose between 15-20% of yield on average per year due to prematurely dispersed seeds in the field.

The study set out to find out if temperature increases had a direct influence on pod shatter in oilseed rape, and how this is controlled by genetics.

“Over the last two decades, scientists have identified the genes that control pod shatter. However, it is not until now that we begin to understand how their activity is affected by the environment, and in this case temperature,” explained Professor Lars Østergaard.

To study the effects of temperature on seed dispersal, Dr Xinran Li, a postdoctoral researcher, monitored fruit development in Arabidopsis, a model plant related to the important Brassicaceae crops, at three different temperatures 17, 22 and 27 degrees centigrade.

This showed that stiffening of the cell wall at the tissue where pod shatter takes place is enhanced by increasing temperature leading to accelerated seed dispersal.

Dr. Li demonstrated that this was true not only for Arabidopsis, but across the Brassicaceae family, including oilseed rape.

The team went on to establish the genetic mechanism which organises the plant response to higher temperatures. Previous studies have shown that pod shatter is controlled by a gene called INDEHISCENT (IND). This study reveals that IND is under the control of a thermo-sensory mechanism in which a histone called H2A.Z is a key player.

The report concludes: “Our findings introduce an environmental factor to the current knowledge, which provide alternative avenues for crop improvement in the face of climate change.”

The paper ‘Temperature modulates tissue-specification programme to control fruit dehiscence in Brassicaceae‘ which appears in the journal Molecular Plant also identifies the genetic pathways behind the temperature sensing mechanism which coordinates the crop’s response to rises in temperature.