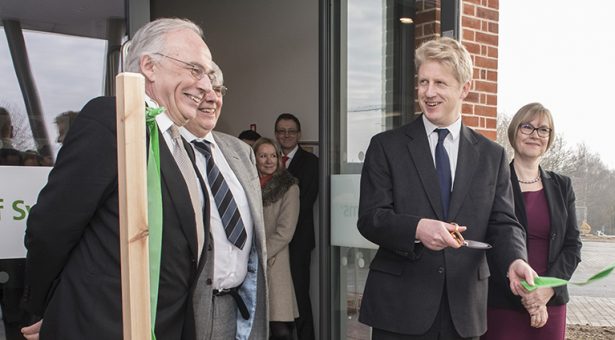 Leaf Systems International Ltd, a spin out company built on the world-leading UK bioscience research that takes place at the John Innes Centre, was today officially opened by Jo Johnson, Minister of State for Universities, Science, Research and Innovation.

The science behind Leaf Systems was developed, with BBSRC investment, at the John Innes Centre and its creators, Professor George Lomonossoff and Dr Frank Sainsbury, won the BBSRC Innovator of the Year award in 2012.

Leaf Systems use a novel efficient, safe and simple system – Hypertrans® – to quickly produce proteins in plants such as vaccines, antibodies or enzymes. The proteins can then be extracted through crushing the leaves and purifying the product. The speed of the system means that it can rapidly produce large amounts of protein and so it is well suited to rapidly responding to emergencies like pandemics. Other potential uses include producing many proteins at the same time and so creating new biochemical pathways for producing complex ‘bioactive’ molecules such as novel anti-cancer drugs and anti-infectives.

Leaf Systems is part of the Norwich Research Park and joins a thriving research and innovation campus centred on world leading research institutes. It will provide services to companies and research organisations by producing sufficient quantities of these valuable proteins and other natural products to enable research and product development.

Universities and Science Minister Jo Johnson said: “UK science and research is world-leading and has played a key role in some of the most revolutionary discoveries of our time. Science will be at the core of the Industrial Strategy, maximising its potential to support local growth and drive investment through commercial partnerships.

“This pioneering technology is an example of British ingenuity – using plants to produce flu vaccines will benefit millions of people across the country.”

Professor Lomonossoff said, “The opening of the Leaf Systems facility represents the culmination of many years of research by myself and colleagues into fundamental virology. There is something rather magical about seeing these efforts being translated into the formation of a company, the construction of a building and the potential for great impact”.

Professor Dale Sanders, Director of the John Innes Centre said, “The John Innes Centre attaches priority to the commercial valorisation of our science. Leaf Systems is an excellent example of that prioritisation, highlighting as it does the enormous potential of plant science for both public good and economic growth”.

Chief Executive of BBSRC, Professor Melanie Welham said, “Leaf Systems is the result of long-term strategic investment in UK research and shows the strength of our bioscience community to not only produce ground breaking science but also to harness that knowledge to create new companies, products and services and foster economic growth”