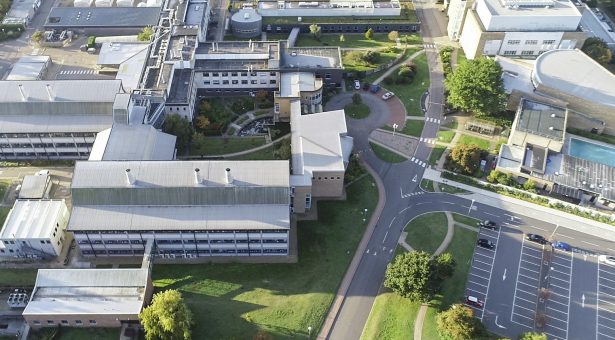 Professor Graham Moore, a world-leading wheat researcher, will become the Director of the John Innes Centre from September 2022.

Professor Moore is currently Deputy Director and has worked at the John Innes Centre for over 30 years. The appointment follows an international search for a successor to outgoing Director Professor Dale Sanders FRS, who announced of his intention to step down last year after more than a decade in the post. Professor Sanders will continue as Director until the end of August to ensure a smooth transition of leadership.

Professor Moore takes up his leadership at an exciting point in the John Innes Centre’s development, as it takes forward ambitious plans to deliver Healthy Plants, Healthy People, Healthy Planet (HP3), a joint scientific vision with The Sainsbury Laboratory.

An international pioneer of wheat research

Professor Moore is internationally known for his work on wheat, one of the most important global crops.  His work provides huge impact on cereal research, and in 2018, he was awarded the Rank Prize for Nutrition for his contribution to research.

He developed the concept of Cereal Synteny, for which he was awarded the Royal Society Darwin Medal. More recently, he characterised the wheat meiotic ZIP4 gene, the major ancestral duplication of which stabilised wheat and led to a doubling of its grain number, an event of extraordinary value to agriculture.

Professor Moore is well known for his collaborative approach, and over the past 12 years, he has coordinated the BBSRC-funded £40m cross-institutional wheat programme, Designing Future Wheat, involving eight UK institutions.

Internationally, he was formerly the European representative on the CGIAR WHEAT Programme Board, overseeing CIMMYT–ICARDA programmes breeding wheat for the developing world, and sat on the G20 Global Wheat Initiative Board, initiated by G20 Agricultural Ministers.

Sir Thomas Hughes-Hallett, Chair of Governing Council for the John Innes Centre said: “Graham is an outstanding scientist who will be a world-class Director for the John Innes Centre. He brings decades of experience of crop improvement as well as a strong appreciation for the fundamental discovery research which makes the JIC so highly respected. We are delighted that he has accepted the position and know he will provide exceptional leadership in his new role, as we accelerate our ambitions to bring fundamental science and global impact ever closer together.

“I would like to thank outgoing Director, Professor Dale Sanders, whose leadership over the last decade has delivered enormous positive impact on the John Innes Centre. Over this time, he has strengthened its outstanding position in plant and microbial science, pioneered its ambitious plans for the future, and built many exciting national and international collaborations.”

“The John Innes Centre is well known for its unique interdisciplinary approach and I’m looking forward to working closely with colleagues to continue to build on our strength in fundamental science as well as applying our knowledge to global challenges such as food security, climate change, and health and well-being.

“I would like to warmly thank outgoing Director, Professor Dale Sanders, for his success over the last 12 years in making the John Innes Centre such a wonderful place to work and supporting the delivery of world-class research. We all wish him a very well-deserved, long and happy retirement.”

Professor Sanders FRS, outgoing Director of the John Innes Centre said: “I’m delighted that Graham is taking up the post of Director of the John Innes Centre. He is not only a scientific leader in his field nationally and internationally but also a tremendously collaborative colleague who is hugely valued across the John Innes Centre. He is a strong advocate for the entire plant and microbial sciences research community and I know he will be instrumental in driving forward the JIC’s plans as a centre of excellence across the spectrum of its activities. I wish him every success for the future.”

Professor Melanie Welham, Executive Chair of BBSRC said: “I am delighted that Graham Moore has been appointed as Director of the John Innes Centre. Graham brings a wealth of experience; he is an outstanding researcher and well recognised for his leadership of significant national and international multi-partner collaborations. I look forward to working with him in his new role.”