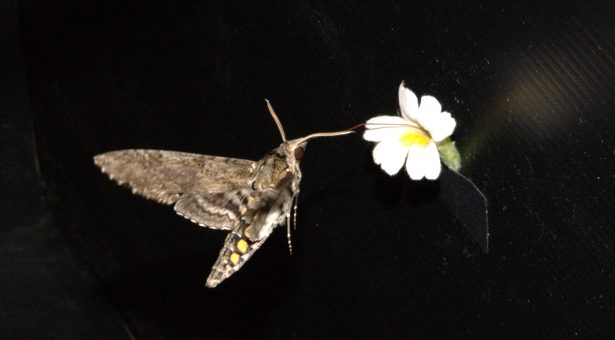 Research into the flower preferences of pollinating moths may have delivered a vital clue to the simple factors needed for the emergence of new species.

Strong coevolutionary relationships between plants and animal pollinators have long been recognised as a potential driver of high rates of speciation in the 275,000 extant flowering plants.

Shifts between pollinators, such as bumblebees, hummingbirds, hawkmoths and bats, often coincide with plant speciation events.

Each of these pollinator “guilds” is attracted by a different set of floral traits such as colour, patterns, scent, shape, and nectar reward, collectively known as a pollination syndrome.

So far, the detailed genetics of traits involved in pollinator shift-driven speciation remain unclear except in a few developing model systems.

In a new study researchers set out to engineer a pollinator switch in the lab that could mirror the origin of a new species in nature.

They selected a species in the genus Mimulus (monkeyflowers) section Erythranthe where the evolution of hawkmoth pollination from hummingbird pollinated ancestors has not occurred.

They made genetic changes to two flower colour genes – effectively synthesising a new Mimulus species with lower levels of the red pigment anthocyanin and yellow carotenoid pigments. These changes were based on observations in nature that most hummingbird-pollinated flowers are red and not easily visible to hawkmoths whose visual sensitivity does not extend to longer, red-light wavelengths. Hawkmoth-pollinated flowers, in contrast, are usually white or pale and highly reflective, adapted for detection by the crepuscular and nocturnal hawkmoths.

The study found that just these two simple genetic changes engineered by the researchers were required to affect the preference of hawkmoth pollinators.

“We expected the hawkmoths to show some preference between colours, but their preferences were extremely strong,” said first author Dr Kelsey Byers of the John Innes Centre and formerly based at the University of Washington (Seattle, WA, USA) where this research took place.

“Our study shows that changes in flowering plant pollination syndrome can proceed through relatively few genetic changes, and this further suggests that only a few simple genetic changes might be required for the origin of a new species,” she added.

Charles Darwin – fascinated by what he described as the “abominable mystery” of diverse flowering plant species – famously predicted that the Malagasy star orchid (Angraecum sesquipedale) which has a white flower and 35cm nectar spur, must be pollinated by a (then undiscovered) hawkmoth with a 35cm proboscis. Exactly such a hawkmoth pollinator was discovered decades after his prediction, confirming his hypothesis.

This study likewise inspires a prospective approach to the understanding of plant speciation by pollinator shift – one of making predictions and testing them experimentally using new trait combinations synthesised in the lab. This contrasts with the classic retrospective approach which involves comparing related plants with different pollinators for differences in key floral traits and the effects of these on pollinator preference.

“We have shown that the critical steps towards the origin of a new, experimentally synthesised hawkmoth-pollinated plant species can be predicted based upon a fundamental knowledge of pollination syndromes and genetics,” said Dr Byers.

So far, the experiments have been confined to the laboratory using lab-reared insects and one potential future direction of the research is to test the hypothesis in nature with wild insects to determine if a novel species could persist in the external environment.