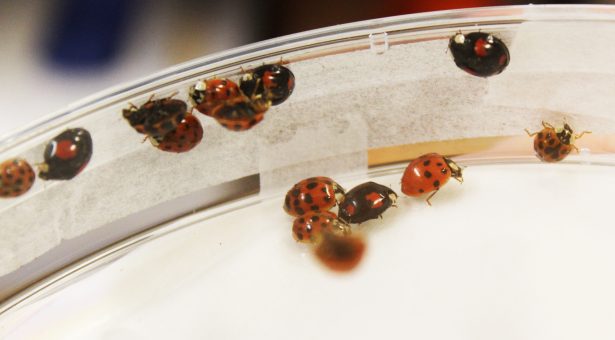 Insect-studying researchers have thanked the public for their help in establishing a thriving new colony of ladybirds at the John Innes Centre.

The entomology team issued the appeal to boost a collection of Harlequin ladybirds (Harmonia axyridis) used to assist research to protect crops and beneficial insects in the wild.

The public appeal in the Eastern Daily Press led to a very strong response – so much so that the researchers have been busy following up multiple sightings of the overwintering insects found clustering in sheds, outhouses, and homes around the region.

With the colony now fully re-stocked Dr Ian Bedford, Head of Entomology, thanked the public and explained the importance of the ladybird research.

“We maintain a ladybird colony within the insectary because they are an important group of aphid predators, vital for maintaining a balanced environment.  Commercially they are an extremely useful ‘natural enemy’, helping with crop protection and integrated pest management programmes.

“When new crop protection products, ideas and strategies are under investigation, it is essential that effects on beneficial invertebrates are investigated. We are often involved in these types of experiments and ladybirds play an important part of this research.”

The Harlequin is an invasive species, from eastern Russia, China and Japan, that has rapidly spread across the UK over the last 15 years.

However, concerns have so far been unfounded because the Harlequin has native predators that keep its numbers down. It is expected that it will find a balance with native ladybirds as it adapts and becomes settled within the temperate environment.

The Harlequin varies in appearance making it difficult to distinguish from native species, apart from having orange legs and being orange underneath.

Unlike native ladybirds the newcomer often hibernates in large clusters over winter which means it is relatively easy to collect.

“The Harlequin is a perfect candidate species for keeping as a laboratory colony under controlled conditions as it is robust, highly fecund and easy to maintain,” explains Dr Bedford.

“However, it is important that every so often, we introduce individuals from other sources to the lab colony to diversify the colony’s gene pool. We would like to thank the public and readers of the Eastern Daily Press for their help.”

The insects are harmless but to prevent them from entering your home the advice is to keep doors and windows fully sealed.