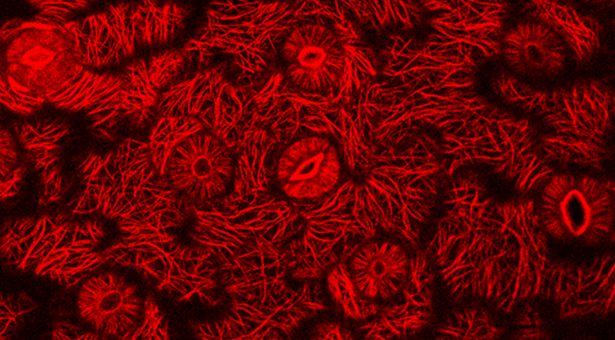 Organised cellulose fibres allow plants to grow, support themselves and store fixed carbon from the atmosphere.

Wood and dietary fibre is largely made of cellulose, and coal is derived from cellulose synthesised millions of years ago.

Researchers have solved the long-standing mystery of how plants control the arrangement of their cellulose fibres.

Previous studies have shown that microtubules – hollow tubes with a diameter one thousandth of a human hair – play a key role in organising cellulose synthesis. They do this by guiding cellulose synthase complexes (CSCs) – nanomachines that spin cellulose fibres out while travelling along the cell membrane.

But when microtubules are removed by drugs, CSCs continue to journey in an organised way, suggesting another mechanism is at play.

In this study, which appears in the journal Current Biology, researchers at the John Innes Centre, discover this mechanism.

By slowing down microtubules inside growing leaves, spacing them apart and removing them altogether in some experiments, they reveal a system that can independently guide CSCs.

Further investigation reveals this autonomous system can be overridden by microtubule guidance, allowing the ‘ant columns’ to be redirected in response to environmental and developmental cues.

Together the findings reveal that plants have a dual guidance system to organise their cellulose fibres.

The study concludes that having a dual guidance may provide a general mechanism to ensure both strong coherence and flexibility of response to environmental and developmental cues, allowing effective regulation of the growth and strength of cell walls.

“The mechanism we discovered was not predicted,” says lead author Dr Jordi Chan. “We hope our findings will help scientists interested in how plants build themselves and those interested in applying this knowledge for sustainable crop productivity and environmental protection.”