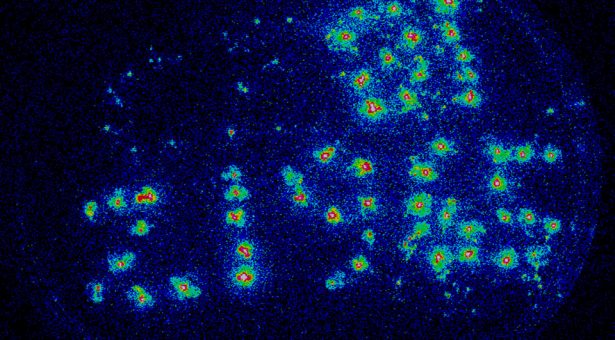 Scientists are decoding the role of non-coding RNA and they are starting to uncover its impact on regulating gene expression, with their focus on a gene that regulates flowering time.

The following is a Q&A conducted with Prof Caroline Dean, Group Leader at the John Innes Centre, and Dr Sebastian Marquardt, formerly a PhD student in Caroline’s group, and now a Postdoc in the department of Biological Chemistry and Molecular Pharmacology at Harvard Medical School.

What was the starting point for the study?

Long RNA species that do not code for proteins (long non-coding RNA) are being detected more and more in many genomes. An important challenge remains to elucidate whether these long non-coding RNA have a biological function.

To address this question, we are investigating the control of expression of the Arabidopsis FLOWERING LOCUS C (FLC) gene. This control relies on a set of long non-coding antisense transcripts from FLC, collectively called COOLAIR, which mediate chromatin repression of FLC.

What were the most surprising results?

We demonstrated by several experimental approaches that splicing of COOLAIR is important for efficient repression of the FLC gene.

This led to the identification of a positive feedback loop linking the local FLC chromatin environment to changes in pre-mRNA splicing efficiency that quantitatively affects FLC expression. As FLC levels correlate with a delay in flowering, our work establishes how flowering can be tuned by affecting the splicing of a long non-coding RNA.

Why is it important to understand the quantitative regulation of gene expression?

Quantitative regulation of gene expression is important but how this is controlled is unclear.

Our work has demonstrated that one mechanism to achieve quantitative variation in gene expression is the linking of splicing efficiency of an antisense transcript to changes in chromatin structure at the gene. These chromatin changes then lead to changed transcription of the gene.

Scientists in other areas of research will now be able to test if splicing of antisense transcripts also facilitates quantitative gene expression in their system.

What is the impact of what you found on flowering time specifically?

We had previously identified a strong correlation between COOLAIR isoform production and flowering. Our new experiments take our understanding beyond this correlation, as we can now show a causal role for COOLAIR and COOLAIR splicing in FLC repression.

What are your next steps?

Dissecting FLC expression continues to be a cutting-edge experimental system to decipher the roles of long non-coding RNA in gene expression. COOLAIR takes a centre stage in FLC expression and we will continue our efforts to understand how COOLAIR splicing impacts on FLC expression.

We will be particularly interest in how changed splicing of COOLAIR triggers changes in chromatin structure to repress FLC expression.