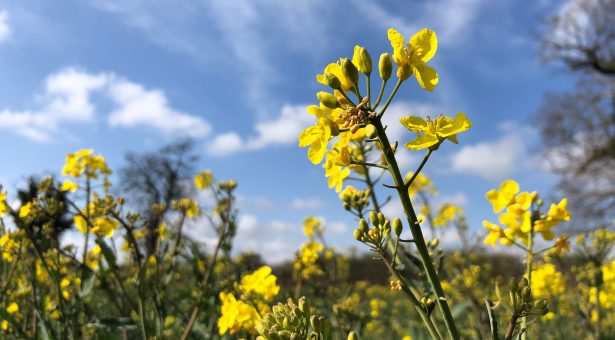 An ambitious collaboration between the John Innes Centre and the University of Hertfordshire will fast track urgently needed solutions to the growing problem of crop diseases.

The innovative project, launched on Thursday 1 July, combines the expertise in Light Leaf Spot pathology at the University of Hertfordshire with oilseed rape genomic technology at the John Innes Centre.

Announcing the BBSRC-funded project Dr Chris Ridout from the John Innes Centre said: “Our project develops a strategy to accelerate deployment of disease resistance and other traits into crops

“We are focusing on oilseed rape (OSR, Brassica napus) which is the most important temperate oilseed crop in the world with a production of close to 70 million metric tonnes and is the third most important crop in the UK after wheat and barley.”

Diseases are a major limitation for production of OSR, a problem exacerbated by climate change and restrictions on the use of agrochemicals for environmental reasons. Light leaf spot (LLS), caused by Pyrenopeziza brassicae, has become the most damaging disease in the UK since 2012.

Economic losses to LLS in the UK reached over £200M in 2016 and have been consistently over £80M between 2012 and 2018. There are no known resistance (R) genes to LLS, and the pathogen has developed multiple fungicide insensitivities including tolerance to azoles, the most used fungicide class used in the UK and Europe.

Dr Henrik Stotz, a reader in crop protection at the University of Hertfordshire and co-investigator on the project said: “The technical aim of the project is to develop improved resistance to LLS. At Herts, we will evaluate OSR varieties with promising LLS resistance identified in an earlier study and benchmark them with elite cultivars on the current OSR Recommended List which breeders provide for growers.”

The project will establish a faster way of developing crops with new traits to meet changing commercial, socio-economic and environmental needs. For over 50 years, farming has relied on intensive application of chemicals and fertilisers, but environmental concerns are shifting the emphasis to more sustainable farming practices.

Dr Rachel Wells, Brassica specialist and co-investigator at the John Innes Centre, said: “We are harnessing the power of natural genetic diversity and combining this with the latest genomic technologies to accelerate the translation of basic research for crop improvement. We are also combining the skills and resources of two institutions to achieve this ambition.”