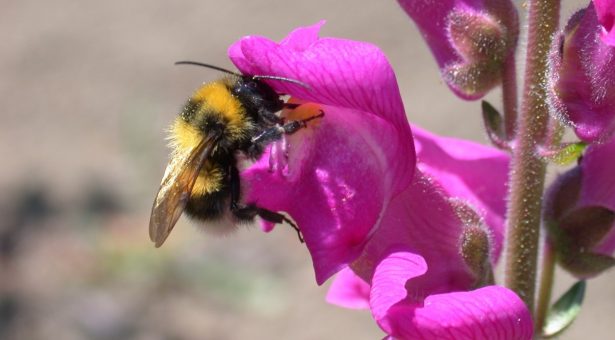 Gardeners could help maintain bumblebee populations by growing plants with red flowers or flowers with stripes along the veins, according to field observations of the common snapdragon, Antirrhinum majus, at the John Innes Centre in the UK.  Bees are important pollinators of crops as well as the plants in our gardens. The John Innes Centre, an institute of the BBSRC, is committed to research that can benefit agriculture and the environment.  “Stripes following the veins of flowers are one of the most common floral pigmentation patterns so we thought there must be some advantage for pollination,” said Professor Cathie Martin.  Nuffield Bursary students spent successive summers observing the foraging patterns of bumblebees on snapdragon plants grown on a plot near Norwich.

The students compared the number of visits by bumblebees to various cultivars of the common snapdragon and the number of flowers visited per plant. Red flowers and those with venation patterning were visited significantly more frequently than white or pink. More flowers were visited per plant too.  “Stripes provide a visual guide for pollinators, directing them to the central landing platform and the entrance to the flower where the nectar and pollen can be found,” said Professor Martin.  “We examined the origin of this trait and found that it has been retained through snapdragon ancestry. The selection pressure for this trait is only relaxed when full red pigmentation evolves in a species.”  Bumblebees are the main pollinators for snapdragon because the weight of the bee is needed to open the closed flower. Pollinators learn and memorise floral signals, such as flower shape, scent, colour and patterns of pigmentation. They return to flowers from which they have previously found food. Simple changes due to single gene changes can have dramatic effects on which pollinators visit and how often.  Collaborators on the project from New Zealand also analysed how the stripy patterns are formed along the veins of the common snapdragon. They showed that two signals interact to create the stripes.  “Complex colour patterns such as spots and stripes are common in nature but the way they are formed is poorly understood,” said author Dr Kathy Schwinn from the New Zealand Institute for Plant & Food Research.  “We found that one signal comes from the veins of the petals and one from the skin of the petals, the epidermis. Where these signals intersect, the production of red anthocyanin pigments is induced.”  Professor Douglas Kell, Chief Executive of BBSRC, which part-funded this research through strategic funding to the John Innes Centre, said: “Pollinator insects, such as honeybees, have a highly significant role in agriculture and any reduction in numbers is economically damaging and risks our food security. Much of the food on our plates is reliant on insect pollination. BBSRC is investing in research to understand how we can arrest pollinator decline and this study shows how horticulturalists and gardeners can encourage bumblebee populations.”