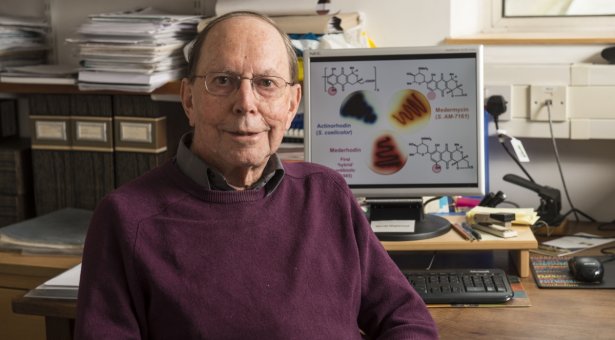 Professor Sir David Hopwood has been named in a Society of Biology poll of influential scientists.

Professor Hopwood pioneered genetics research into the soil bacteria Streptomyces, starting in the 1950s, as part of his research into Streptomyces as a potential intermediate organism between bacteria and fungi – Streptomyces has filaments which resemble fungi and it was originally thought it was itself a fungus.

Streptomyces is an important bacterium, giving rise to half the world’s antibiotics in use today.

Professor Hopwood has spent his working life researching the class of bacteria called Actinomycetes, of which Streptomyces is a member.

He pioneered the technique of making “designer” antibiotics by genetic engineering and coordinated the sequencing of the entire genome of a Streptomycete in 2001, revealing many insights into its biology, especially its capacity to make antibiotics.

More recent research has been into discovering how to activate ‘sleeping’ genes within the bacteria which are not expressed under laboratory conditions, with a view to using their products to combat drug-resistant bacteria.

The Society of Biology poll was carried out as part of a wider project to commemorate and acknowledge biologists who have had a significant impact on understanding or scientific advances.