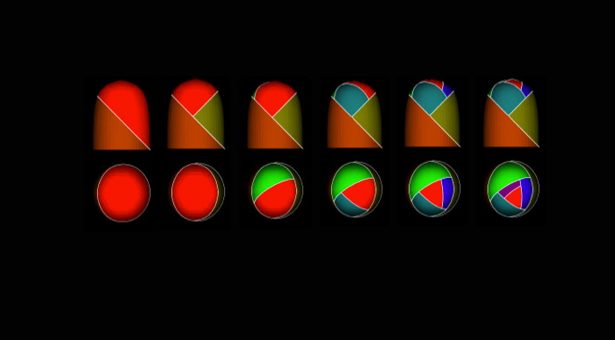 The Dr Richard Smith lab has received funding from The Human Frontier Science Program (HFSP) to investigate phyllotaxis and how a single cell can shape a shoot, in collaboration with Teva Vernoux (RDP Lyon), Professor Siobhan Brady (UC Davis) and Professor Matias Zubriggen (University of Düsseldorf).

The self-organising properties of phyllotaxis have for centuries puzzled biologists, physicists and mathematicians.

Phyllotaxis first evolved in morphologically simple plants like mosses, but the mechanism have mostly been studied in flowering plants such as Arabidopsis thaliana, tomato or maize.

These studies have revealed inter-dependent regulations by biochemical and physical cues that have been difficult to study because of the complexity of their multicellular shoot apex and technological limitations.

“Understanding phyllotaxis has always been an interest of mine, since I did a lot of modelling work on that in Arabidopsis, so I am delighted that the HFSP has provided us with funding to look at phyllotaxis in moss” explains Group Leader Dr Richard Smith.

“To explore the fundamental question of how phyllotaxis emerges from biochemical and physical signals, at single cell-resolution, we will use the unique inter-disciplinary expertise assembled within our international team.

This funding will allow us to develop and apply cutting-edge approaches that combine predictive computational modelling, developmental genetics, optical and physical imaging, single cell transcriptomics and optogenetics to the analysis of phyllotaxis in moss.

Through these approaches, we hope to identify the design principles underlying dynamical changes in the division orientation of a single cell to generate specific phyllotaxis and generate key insights into the evolution of phyllotaxis.

From a developmental perspective, knowledge gained from moss should be transferable to other species with more complex meristems and help to understand the contribution of cell division orientation to plant morphogenesis, which remains overall poorly understood.”

The Human Frontier Science Program is a program of funding for frontier research in the life sciences. It funds cutting-edge, risky projects supporting international teams of scientists with laboratories around the world, selected for the innovative and creative potential of the research teams.

The image at the top of this page shows a simulation model of successive division of the shoot apex of the moss Physcomitrium patens. Divisions organize around an tetrahedral central cell, with each division creating a leaf initial in a pattern leading to spiral phyllotaxis. It was created by Brandon Lane.