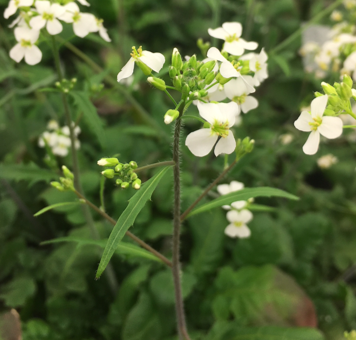 Scientists from the Norwich Research Park have discovered an antibiotic-producing enzyme in oats that could be used in the future to protect major cereal crops from fungal diseases such as “take-all”.

This disease is estimated to affect half the UK’s wheat crops costing the agricultural industry up to £60 million per year.

Take-all is a particularly damaging fungal disease because it infects the roots of the plant and can be passed onto subsequent crops grown in the same field. The researchers found that Sad2 functions in the roots, producing the antimicrobial at the site most vulnerable to fungal attack.

The research, funded by the Biotechnology and Biological Sciences Research Council and Gatsby Foundation, is published in the Proceedings of the National Academy of Sciences this week and shows that Sad2 has evolved from an ancient family of enzymes that have remained unchanged over millions of years and are almost identical across the plant, fungi and animal kingdoms.

All the other enzymes in this family are involved in producing essential fats called sterols, such as cholesterol in humans, and include targets for cholesterol-lowering drugs, antifungals and herbicides. The discovery of a new member of this enzyme family with a completely different function was therefore surprising.

“Many plants produce chemicals called ‘natural products’ that are not essential to growth but have a range of important ecological functions. They can be attractants for pollinating insects or, in this case, protect the plant against diseases,” explains Professor Osbourn.

“Our aim in this work is to understand how these natural products are made and why the ability to produce particular natural products is limited to certain plant species. Our data show that the Sad2 gene has evolved from the most ancient and highly conserved cytochrome P450 family by gene duplication and has then diverged from its original role in making sterols to adopt a new function producing an antimicrobial chemical called avenacin”.

The synthesis of avenacin is a multistep process; the John Innes Centre team have already identified five genes coding for different enzymes in this pathway and are currently isolating the others. Unexpectedly, they found these genes were clustered together in the plant’s genetic code; clusters of genes that have connected functions are often found in bacteria or fungi but are extremely rare in plants.

“This is only the second gene cluster that has been identified in plants, but I now believe they are more common than previously thought,” says Professor Osbourn, “If we could transfer this gene cluster from oats into other plants, it might be possible to breed cereals that are resistant to devastating crop diseases such as take-all. Our findings also have broad significance for understanding how new metabolic pathways arise in plants, and this is an area that we are now investigating in other plant species such as rice and in the model plant Arabidopsis.”