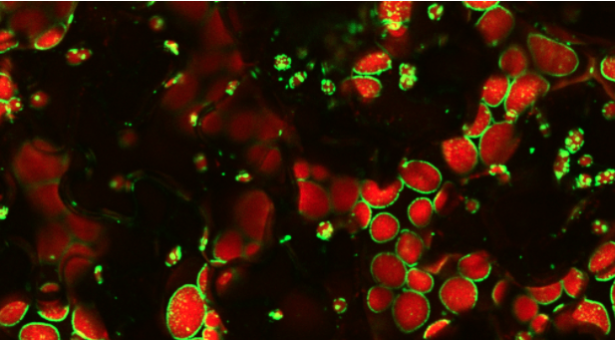 Scientists from the John Innes Centre, the universities of Cambridge and Edinburgh and Stanford University in California, have shown that genes from an alga which is capable of very efficient photosynthesis can function properly when introduced into Arabidopsis, a plant commonly used for scientific experiments.

They also showed that the presence of the algal genes does not have a negative effect on the growth or functioning of the plant. This achievement is an important first step towards transferring the entire, highly efficient photosynthesis mechanism from the alga into plants.

In many plants including the major crops wheat and rice, productivity and yield are limited by the properties of the enzyme that starts the process of photosynthesis – the conversion of carbon dioxide from the air into the sugars required for plant growth. This enzyme – called RuBisCO – operates inefficiently at the levels of carbon dioxide present inside a leaf.

If carbon dioxide concentrations in the leaf were higher, the enzyme would operate more efficiently, more sugars would be produced and the plant would grow faster and become more productive.

In an effort to increase crop yields, biotechnologists are investigating how the carbon dioxide concentration in the leaves of these crop plants might be elevated.

One promising line of enquiry is a carbon-concentrating mechanism (CCM) that operates in single-celled green algae. These algae live in water, an environment with very low carbon dioxide concentrations. They pump bicarbonate – a hydrated form of carbon dioxide – into their cells to achieve a high internal concentration.

An enzyme called carbonic anhydrase then converts bicarbonate to carbon dioxide in a region of the cell that contains the RuBisCO, so enabling the RuBisCO to operate with high efficiency.

Scientists from the four world leading universities and institutes are collaborating to discover all of the components of the algal CCM, and to investigate whether transfer of these components into plants could elevate the carbon dioxide concentrations in leaves and thus increase plant productivity.

In a research paper published in Plant Biotechnology, they show that algal genes encoding bicarbonate pumps and carbonic anhydrase can function properly when introduced into Arabidopsis. The CCM components are produced in the appropriate parts of the Arabidopsis leaf, and their presence does not affect the growth of the plant.

As new components of the algal CCM are discovered, the algal genes that encode them will also be introduced into Arabidopsis, and if they achieve the desired outcome of increasing crop growth and productivity, they will be transferred into and tested in crops.

“Although our research is in its early stages, the results are very promising. Elevation of carbon dioxide concentrations in the leaves of crop plants should substantially boost crop yields, and thus help to close the gap between crop production and predicted food demand over the next 50 years.”