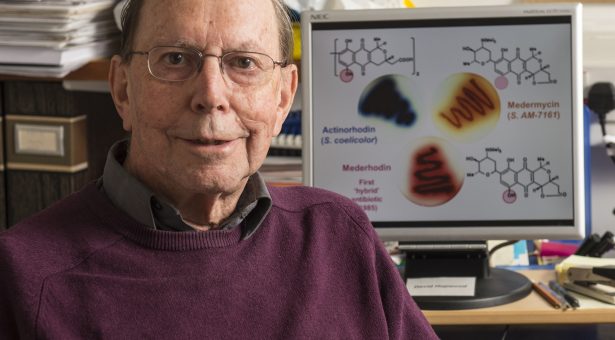 Streptomyces bacteria are today recognised as globally important industrial microbes, producers of most of the world’s antibiotics.

But 60 years ago, understanding of what made them tick was primitive in the extreme:  it was not until the 1950s that they were identified as bacteria and not fungi moulds or a hybrid between the two as previously debated.

The change in understanding is due in no small part to the work of one man, Professor Sir David Hopwood, whose remarkable career is outlined in a new book.

From making fundamental biological discoveries, to building a community that brought academia and industry into fruitful partnership, Sir David was the driving force in the Streptomyces field for his entire scientific career.

He joined the John Innes Centre in 1967 as its first Professor of Genetics, when the centre moved from Bayfordbury in Hertfordshire to its present location in Norwich to associate with the newly founded University of East Anglia.

As part of the celebrations to mark the 50th anniversary of the move to Norwich, the John Innes Centre commissioned science writer Kathleen Weston to write a short biography. Drawing on personal recollections and those of close colleagues, the book develops a portrait of a man whose: “office door was always open, who was always available for a chat about science”.

Looking back on a career which saw him made a fellow of the Royal Society and Knight of the Realm, Sir David reflects in the book: “It’s really just been asking about biology – what does it do? I haven’t managed my career. It just sort of happened.”

Professor Mark Buttner John Innes Centre Head of Molecular Microbiology said of his former senior manager: “David was a a very effective leader and manager as well as a great scientist and that is a very unusual thing. There are not many areas of microbiology where you would say the UK has a lead over the rest of the world, or has had such a lead, but Streptomyces was clearly such an area.

“Streptomyces accounts for nearly 40 billion dollars of revenue in the pharmaceutical industry worldwide. In terms of fundamental research, David is the father of that field and everyone in it owes him a fundamental debt.”