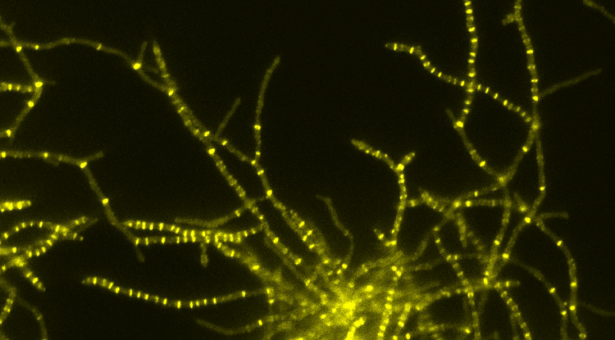 Many bacteria produce toxins that can threaten human health, however new research into how bacteria secrete these substances is giving clues as to how scientists could harness these processes to produce biopharmaceuticals.

Researchers at the John Innes Centre in Norwich have used state-of-the-art technology to study a nanomachine in soil bacteria called the Tat system, which the bacteria use to secrete a range of proteins that help them digest food and compete with other microorganisms in the soil.

The scientists’ latest work, published today in the respected journal PNAS, identifies which proteins are exported via the Tat system, revealing that this system is used by more proteins than previously thought.

The biotechnology industry already uses bacteria to make proteins to use in products such as biological washing powder or pharmaceuticals, but some are difficult to produce using current methods. By harnessing the Tat system, the scientists hope that it will be easier to make these proteins for biotechnological and biomedical purposes.

The foundation work for this project was started as part of the BBSRC’s Exploiting Genomics Initiative; more recently Professor Palmer’s team has joined forces with the “Tat Machine Project”, an EU-funded consortium of researchers from across Europe studying the Tat system.

In addition to using the Tat nanomachine to improve production of biopharmaceuticals, the consortium are studying the system in several different types of bacteria, including pathogenic species like E. coli O157 and Pseudomonas aeruginosato explore Tat as a potential target for new antibiotics.

“The Tat nanomachine selects which proteins to secrete by recognising a short signal sequence attached to the end of the protein”, explains Professor Tracy Palmer who has an MRC Fellowship with the University of East Anglia.

“Our collaborators at the University of Pennsylvania have developed a computer program to search the bacterial genome to predict which proteins use the Tat system, and in this study we have verified their results experimentally and found a significant number of signals that are recognised by this system. The next step is to attach these signals to medically important proteins so they can be secreted by the bacteria using the Tat system.”