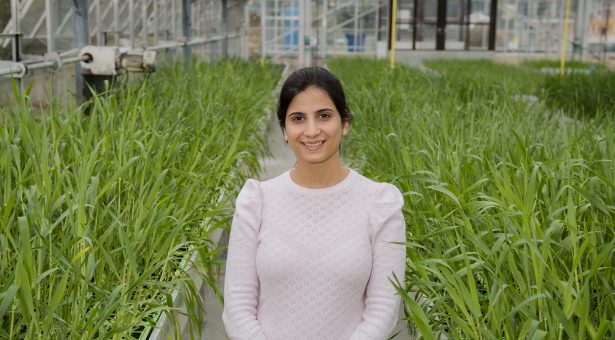 The award provides professional development opportunities for women working in wheat with Dr Arora joining an exclusive group of 50 international recipients since 2010.

Dr Arora is one of six winners of the award for 2019 which was announced at the International Centre for Maize and Wheat Improvement (CIMMYT) in Mexico.  This year’s recipients come from India, Pakistan, Ethiopia, Mexico and Ukraine.

In making the award the review panel of the Borlaug Global Rust Initiative (BGRI) praised Dr Arora’s “commitment toward wheat research on an international level” and her “potential to mentor future women scientists.”

Dr Arora is a researcher in Dr Brande Wulff’s group at the John Innes Centre working on a method to rapidly clone crop disease resistance genes.

The technique called AgRenSeq involves searching a genetic “library” of resistance genes discovered in wild relatives of modern crops so they can rapidly identify sequences associated with disease fighting capability.

By making crops more disease resistant, the technique outlined recently in the journal Nature Biotechnology, will help to improve yields and reduce the need for pesticides.

Dr Arora said: “I am thankful to BGRI for recognising my work in speed cloning of resistance genes. The WIT Early Career Award will help me to achieve my target of building a catalogue of cloned R genes, which would help underpin breeding for durable resistance.”

“I grew up in the Punjab, India, where the tremendous socio-economic impact of the Green Revolution was felt by people around me. In recent years the excessive use of pesticides and emergence of increasingly virulent pathogens now threaten the viability of the farming industry. Improving this has been my driving force in developing new techniques to improve crop resistance to pathogens.”

Dr Brande Wulff said: “I am delighted to see Sanu recognised with a WIT Award. Her drive and intellect and unwavering engagement in the face of initial scepticism proved critical to the success of developing AgRenSeq. I hope she will continue to apply her energy and skill to solve new problems and bottlenecks in wheat breeding and research.”

Established in 2010, the early-career award is named after Jeanie Borlaug Laube, a high-profile mentor for scientists, and daughter of the Nobel Laureate Dr Norman E. Borlaug who is considered to be one of the founders of the Green Revolution.

Dr Arora has been invited to a WIT training course at CIMMYT, in Obregon, Mexico, and a BGRI Technical workshop taking place in Norwich in June 2020.

The awards are part of the project Delivering Genetic Gain in Wheat (DGGW) an international initiative to improve wheat that is funded by the Bill and Melinda Gates foundation and UK aid from the UK government, Department for International Development (DFID).

Maricelis Acevedo, Associate Director for Science of the DGGW said: “Building capacity within the scientific community by encouraging and supporting the training of young women scientists has always been one of our key goals. Collectively, these scientists are emerging as leaders across the wheat community.”