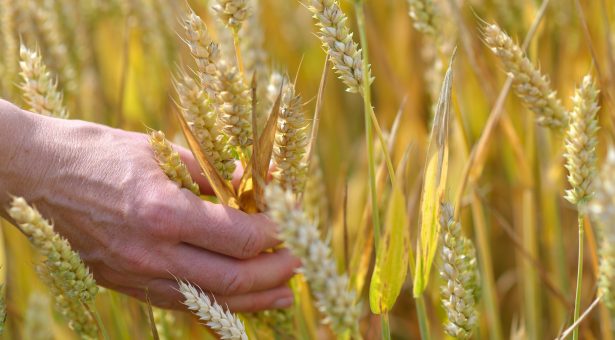 A new virtual Joint Centre brings together major UK and Indian researchers with programmes on wheat improvement to determine the genetic control of nitrogen use efficiency in wheat.

The Indo-UK Centre for the improvement of Nitrogen use Efficiency in Wheat (INEW) was launched today at the Indian Institute of Wheat and Barley Research (ICAR-IIWBR, Karnal, Haryana, India).

The new centre will generate new types of wheat with improved use of nitrogen, which can be used in breeding programmes in both countries, carrying out a joint research programme, developing shared technologies and facilities and providing training opportunities for early career scientists.

Significant economic and environmental impacts will be achieved through the sustainable intensification of wheat production, which will reduce the use of nitrogen fertilisers by farmers. This will result in reductions in production costs for farmers and in the release of nitrogen into the environment.

Nitrogen is the major agronomic input that determines the performance and productivity of crops, in both rain fed systems in the UK and Western Europe and the irrigated north-western plains of India, as well as resource poor marginal eco-systems of eastern plains.

This has consequences for production costs, with nitrogen being the major production cost for both Indian and UK farmers. Additionally the environmental footprint of the crop is affected as nitrogen contributes to greenhouse gas emissions and to contamination of ground water.

Similarly, India is the second largest consumer of nitrogen fertilisers in the world after China. A total of 12 million tonnes of fertiliser nitrogen was consumed in India during 2012-13 (about 15% of total world use) at an estimated cost of £3000m.

Wheat is the major staple crop in the UK, with between 12 and 15 million tonnes being grown annually. Similarly, between 90 and 95 million tonnes of wheat are produced annually in India, mainly in the north-western plains.

The new centre will be led by Professor Peter Shewry at Rothamsted Research and Dr Karnam Venkatesh at ICAR-IIWBR and brings together the major wheat research providers in the two countries.

Strong collaborations are already in place between these partners and the UK partnership, which comprises researchers at NIAB, the Universities of Nottingham and Bristol and the John Innes Centre.

The Centre is one of four similar initiatives funded by a total of £10M investment from the Newton-Bhabba fund,which supports collaboration between UK and Indian scientists to help meet the challenge of sustainably producing enough food for a growing population whilst reducing pollution and greenhouse gas emissions.

The funding (£5M from the UK with matched resources from India) will create four new Virtual Joint Centres in Agricultural Nitrogen delivered in partnership by BBSRC, the Natural Environment Research Council (NERC) and the Department of Biotechnology India (DBT).