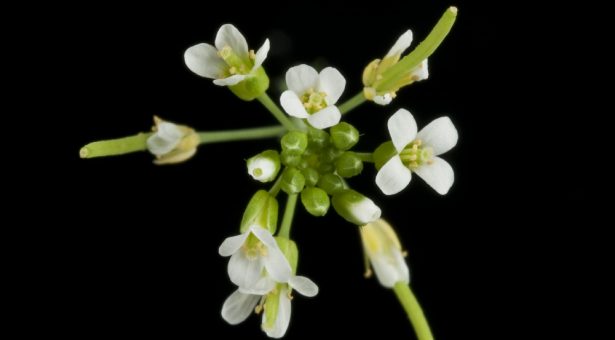 Research by plant scientists from the John Innes Centre reveals a breakthrough towards understanding cellular ‘memory’.

All living things experience variable environmental conditions on a daily basis. To cope, they must rapidly adapt by switching on beneficial genes, and switching off genes that are not needed.

Professor Caroline Dean, recently named in the top 1% of highly cited scientists, aims to understand how plants monitor and remember exposure to cold during winter; a process called vernalization.

Central to this mechanism is the regulation of expression of FLC, a gene that encodes a brake to flowering. Using the garden weed Arabidopsis thaliana, a plant commonly used for scientific research, Professor Dean and her colleagues Dr Hongchun Yang and Professor Martin Howard have identified a mechanism by which cold can switch the FLC gene on and off.

Previous work in this area showed modifications to the histones – scaffolding proteins that hold chromosomes together – can change the chromosome’s accessibility and make it easier or more difficult for certain genes to be expressed.

Mathematical modelling predicted that for each histone modification allowing silencing of a gene, an opposite, mutually exclusive modification would exist to switch those genes on again.

This new research, published today in the journal Current Biology, partially confirms the model’s prediction, and describes the finding that a modification at a certain location on Histone 3 (H3K36me3) causes FLC to be active, while a different modification (H3K27me3) is present when it is silenced.

Professor Dean said: “H3K36me3 doesn’t show a perfectly mirrored profile to H3K27me3, so while we have confirmed that opposing histone modifications are necessary to switch between two stable states of gene expression, they are not sufficient; there is something else required for memory as well.”

The team believes the plant uses opposing histone modifications in the FLC region to ‘register’ how long it has been exposed to cold during wintertime. Before winter, the H3K36me3 modification allows FLC gene expression to occur; blocking flowering. As winter progresses, the H3K27me3 modification accumulates to switch the gene off and allow flowering to occur in spring.

Professor Dean said: “Though this finding was made in plants, we believe histone modifications are used to control gene expression relative to environmental stimuli in many higher organisms. Understanding how the mechanism works, and how this incredibly complicated regulation is preserved through cell division, will give insight into why gene expression can sometimes go wrong. This may be very significant for a number of fields in biology and medicine, including research into human cancers and other genetic diseases.”