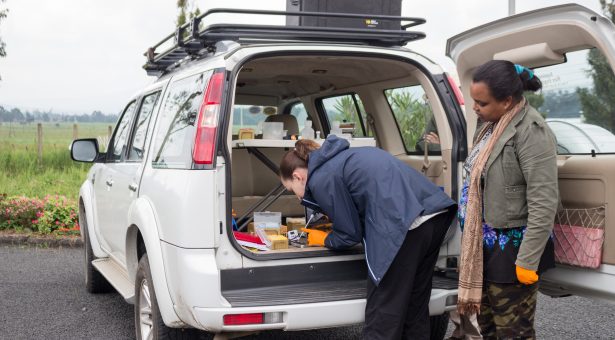 John Innes Centre researcher Dr Diane Saunders has been selected as one of 12 finalists in the BBSRC Innovator of the Year Competition 2019.

The award highlights individuals and small teams who are producing outstanding work from their research funding.

Dr Saunders’ nomination is in the category for international impact following her team’s potentially transformative approach to identifying individual strains of complex fungal pathogens directly in the field. Working in collaboration with Dr Dave Hodson from CIMMYT, the nomination follows their successful demonstration of the technology with the Ethiopian Institute of Agricultural Research last year.

Dr Saunders said: “I’m delighted that this work has been recognised. Wheat rusts are a global threat to agriculture and we are in a constant battle with these diseases. Our diagnostic kit allows users to make immediate decisions regarding disease management within the current growing season.”

Previously, if you were a researcher in a developing country and you suspected local crops were infected with a new rust strain, you would have to wait many months for the sample to be sent off to specialist labs and tested. By this time, it’s usually too late for within season disease control strategies. With Diane’s new approach, this process now takes just two days.

Dr Dave Hodson said: “This difference in time is vital. In Ethiopia in 2010, a stripe rust outbreak caused a 20-30% loss of harvest. Ethiopia is the largest producer of wheat in sub-Saharan Africa and these losses severely impact food security and livelihoods of smallholder famers. Stopping a rust outbreak before it can develop is possible but it relies on this fast identification of the threat.”

What makes Dr Saunders team’s method so fast is that the entire pipeline, from field sample to strain level result, can be run from a mobile ‘suitcase’ lab. MARPLE (Mobile and Real-time PLant disEase) diagnostics is designed to run at a field site, without constant electricity and on reagents that work in the varying temperatures of the field.

“This means we can truly take the lab to the field,” explains Dr Saunders. “Perhaps more importantly though, it means that smaller, less resourced labs can drive their own research without having to rely on a handful of large, well-resourced labs and sophisticated expertise in different countries.”

The international impact of rust is a well-studied area and Dr Saunders’ new platform marks a notable step toward rapid responses to emerging outbreaks. Crucially, MARPLE diagnostics brings this research out of the labs and puts it in the hands of those best placed to respond; the field researchers on the ground who work with local government and farmers alike.

The BBSRC Innovator or the Year reward recognises the impact bioscience research and innovation has on lives, society and the economy. In a recent interview the director of the Ethiopian Institute of Agricultural Research, Dr Tadessa Daba, said, “we want to see this project being used on the ground, to show farmers and the nation this technology works.”

Dr Saunders and Dr Hodson will present the mobile lab in the final at The London Science Museum on May 15.

Development of the MARPLE diagnostic kit was funded by the Biotechnology and Biological Sciences Research Council (BBSRC) and CGIAR Big Data Platform Inspire Challenge. Continued support is also provided by the BBSRC Excellence with Impact Award to the John Innes Centre and the Delivering Genetic Gain in Wheat Project led by Cornell University International Programs that is funded by the UK Department for International Development (DFID) and the Bill & Melinda Gates Foundation.