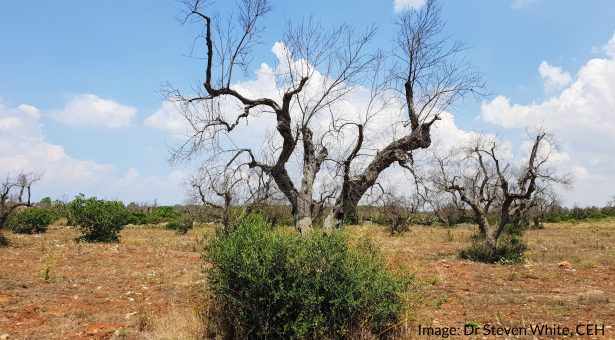 Xylella fastidiosa is a bacterial disease of plants, it is transmitted by insects to host plants.

Xylella can infect more than 500 species of plant causing leaf scorch, wilt, die-back and may lead to plant death. There is no known cure for the disease.

Xylella lives in the xylem of plants, it is transmitted by insects to host plants. Insects which feed from the xylem can acquire Xylella and then transmit the bacterium to other plants. 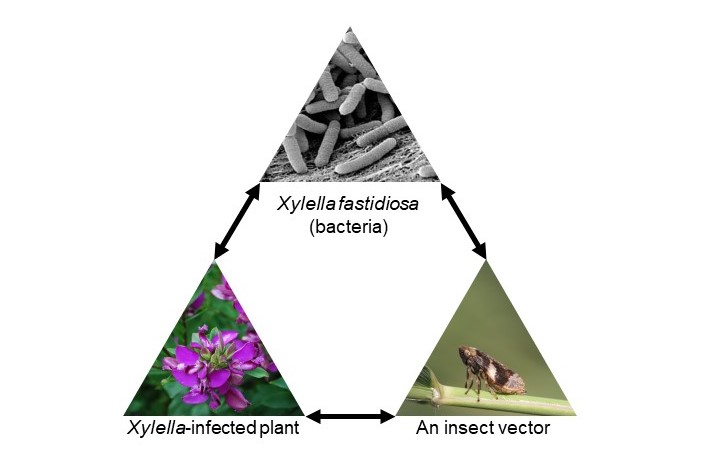 How does Xylella spread?

The bacteria is transmitted between plants by insects, including leafhoppers, froghoppers and spittlebugs which feed on the fluid found in the xylem of the host plant. Further information about the insect vectors of Xylella. Insects spread Xylella by feeding on infected plants and hopping to other plants, and feeding there.

The host plants range from herbaceous perennials to trees, including ornamental and crop plants, and native flora. Humans may move Xylella-infected plants, through trade, individuals or accidentally.

What are the host plants of Xylella?

There are at least four subspecies of the bacterium which have different host ranges:

Xylella is not present in the UK.

For many years Xylella was restricted to the Americas, predominantly in tropical and subtropical regions, but with some subspecies spreading as far north as New York, USA. Prior to 2013 an isolated outbreak in Asian pear (Pyrus pyrifolia) was reported in Taiwan.

In 2013, Xylella fastidiosa (subspecies pauca) was detected in diseased olive trees in Puglia, in the south of Italy.

Two years later, Xylella was reported in Corsica and in the southern part of mainland France, on ornamental plants such as Polygala myrtifolia and native Mediterranean plants in urban and natural environments. In 2016, Xylella was detected in Germany and on Mallorca in the Balearic Islands in sweet cherry (Prunus avium). Outbreaks were subsequently detected on other islands in the archipelago (Ibiza, Formentera, and Menorca).

How would the UK respond if Xylella arrived in the UK?

The response will depend on where the infection occurred, the risk or evidence of spread and what early actions have been taken.

If infected plants are identified on arrival, action may be limited to destroying the affected plants and any potential hosts in close proximity. Where there is evidence that the disease has spread, actions are likely to include: destruction of all host plants within 100 m of the infected plants; thorough surveys for further infected plants and vectors; and movement controls in a 5 km buffer zone.

Xylella has the potential to cause significant damage to the horticultural trade and wider environment if it were to become established in the UK. To prepare for this threat the government has prepared a response plan which describes the actions that have been taken to reduce the risk of the introduction of Xylella and to ensure a rapid and effective response to any outbreak.

BRIGIT is working to increase our understanding of the geographical distribution and population structures of potential insect vectors.