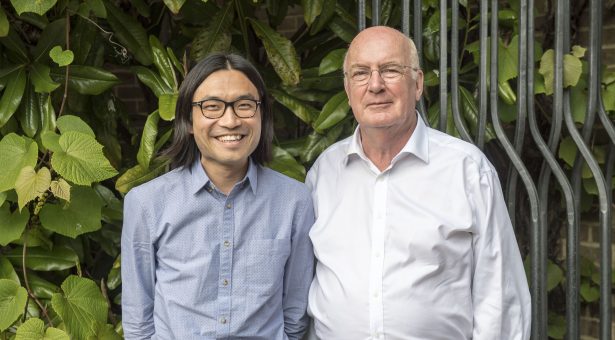 David’s new group are working to find out how plants make starch at the molecular level. We caught up with him to ask why, of all the areas of plant and microbial research David chose starch and what it was like to meet the man his fellowship is named after.

“I work on starch and trying to further our understanding of how it is made in plants.

Starch is not only a key part of our diet, but we also use starch in lots of non-food ways, such as; in paper, adhesives, textiles and producing bioplastics. But despite how important starch is to us, we still don’t fully understand how it is made.

There are some really big questions that remain unanswered about starch. For example, we know starch is made from two polymers; amylose and amylopectin and we understand quite a bit about the biochemistry of how those polymers are made. The polymers assemble into insoluble granules, but how this assembly takes place is not really understood. Nor do we know what determines granule shape and size.

Furthermore, there are huge differences between the granule morphology of starch from rice, potato, wheat, etc. We can’t really explain where these differences come from.

We also don’t know what happens at the very beginning, what we call the initiation process of the starch granule. How is starch synthesis primed?

The way in which granules initiate can have a major impact on granule size and morphology, so I am particularly interested in the initiation problem, as well the assembly of starch polymers into defined granule shapes – I think these are two of the major questions in the field of starch research at the moment.

The hypothesis that we are starting to provide solid evidence for, is that starch granule shape and size are key determinants for what those starch granules can be used for. If you look at the literature, there are a lot of suggestions that starch granule size can have a major impact on cooking properties, plus final product quality, such as mouth-feel, texture and digestibility, all the nice things we want in food, so we’re investigating that further.

I got into starch research really early in my scientific career, and I have been very lucky to have inspiring mentors throughout. I first started work on starch in the first year of my bachelor’s degree. The first research project I did was in the lab of Professor Les Copeland and Dr Meredith Wilkes at the University of Sydney, who were really into starch. Back then we were working on wheat starch, and even though it was only a decade or so ago, the genetic resources for wheat research were almost non-existent then, but their enthusiasm was infectious and I’ve never left the field.

You could say, me and starch just clicked, but I wanted to really use genetics to understand mechanisms behind starch synthesis. So, I moved away from wheat to work on Arabidopsis, primarily to take advantage of all the genetic resources that were available thanks to its status as a model species.

I chose to do this in Switzerland because I wanted to train under Professor Sam Zeeman at ETH Zurich, who is one of the leaders in research in this area. It was during this period that I was able to identify proteins that are important for starch initiation and granule morphology, but at that time it was completely unknown as to how relevant these were to major crop species.

By the time I came back to working on wheat starch, here at the John Innes Centre, things had progressed massively and thanks to my colleagues here, we have so many genetic resources available for wheat research.

I initially came to the John Innes Centre on a BBSRC Future Leader Fellowship, which allows you to be an independent Postdoctoral Scientist, working under a mentor on the area of plant research that you’re passionate about. My mentor was Professor Alison Smith, a titan of starch and sucrose metabolism research. Alison’s encouragement was essential for me to pursue where the research took me.

As my research projects began to expand, I reached a stage where I couldn’t really handle all the investigations by myself, at the same time there was a call for this new Chris J Leaver Fellowship, which would allow me to start my own research group at the John Innes Centre. It couldn’t have come at a better time for me, so I applied and here I am. It’s a great Fellowship. It gives a lot of resources and freedom to pursue all my ideas, and generous access to the scientific facilities that are available at this institute. I am very thankful to the John Innes Foundation for funding it. Most importantly, I am also very grateful that such talented scientists joined my group from the outset.

I had known of Professor Chris Leaver since my bachelor studies, he is a huge name in plant biochemistry. Even though he worked mainly on mitochondria and I work on plastids, many of his findings are relevant to my studies. Processes that go on within mitochondria can have an impact on starch metabolism in plastids.

I never expected to meet him, so I was delighted when the opportunity arose a few months ago. We had a fascinating chat and he was kind enough to pass all of his papers on to me, which provided great historical insight into important advances in plant biochemistry and metabolism.

I hope that in the future we can fully explain all of the processes that lead to the formation of a starch granule, from a full molecular picture of how starch granules are initiated and how they develop, through to why these things are important to the plant and how they might be beneficial to both society and industry. The Fellowship is for five years, but that’s not really a five-year goal, it’s more like a fifty-year goal. For now, it’s really nice just to get started on these ideas and train more people up to help carry these things forward.”