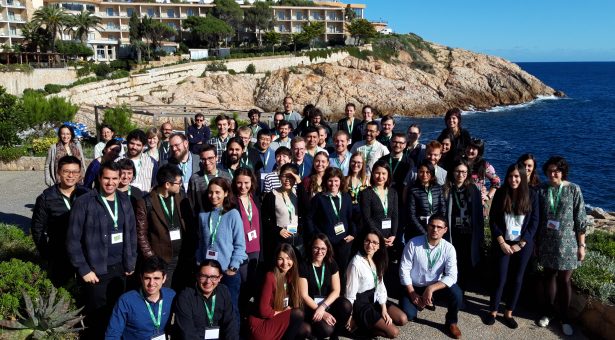 Earlier this year, a group of our scientists headed off to Spain for the inaugural Early Career Researchers Conference, organised by Postdoctoral Scientists and Postgraduate Researchers.

We asked two of them; Jo Hepworth and Millie Stanton, to tell us all about it.

“The view outside the window is of an exquisite, sunny Costa Brava coastline, with palms and pool and bright blue sea. In the room, 60 people all have their back to the windows. Why? Plant and microbial sciences of course.

Rather than admire the view; the audience are all listening avidly to the opening presentation of the first trilateral Early Career Researchers Conference, being held at the Centre for Research in Agricultural Genomics (CRAG) in Barcelona.

Supported by the John Innes Centre and the Max Planck Institute for Plant Breeding Research (MPIPZ) in Cologne, the Early Career Researchers Conference aims to bring together researchers working in Spain, Germany and the UK. The idea is to build relationships and collaborations between scientists starting their journey in biology, hoping that they will blossom into long-term links to progress the very best of international plant science.

Where better to start than sunny Spain?

Our hosts from CRAG had arranged a packed program of science, with over 40 presentations spread across just two days. When you add in the usual poster presentations, there were no siestas here.

One of the key features of the Early Career Researchers Conference is that everyone has the opportunity to present their science in one way or another, which ensures a highly interactive conference.

Incredibly, despite a five-hour power-cut, all the talks were delivered, including two impressive ‘acoustic’ presentations by Yulia Yarkhunova of MPIMZ and Julia Zinsmeister of CRAG, improvising with a flip chart. Yulia’s efforts earned her a special award at the end of conference for volunteering in the organiser’s hour of need.

The talks covered a range of topics which illustrated the variety of plant research and microbial science that is being worked on, including;

We also heard how plants respond to cold and light, and how several different species from Arabidopsis to wheat use this to time their flowering to the right season.

Finally, bacteria and viruses featured as both friend and foe of plants, sometimes causing disease, but at other times forming part of a microbiota helping plants adapt to their environments

Adaptation to environment was a theme, and the environments varied a lot: the mountains of East Africa, the cold winter of northern Sweden, the summer coastline in Spain to the watery places that algae live.

Fundamental questions of biology were addressed, such as;

This extraordinary variety, with the subject changing from talk to talk, ensured that the meeting remained interesting and relevant. The delegates were further inspired by presentations from well-respected Group Leaders such Ana Caño-Delgado and Maria Lois from CRAG. Plus, our own Dr Xiaoqi Feng and Dr Scott Boden also presented work from their groups and tips on academic careers.

Our personal highlights included Neus Marimon of CRAG talking about using fine mapping on peach trees in the battle against powdery mildew. Fine mapping is a technique to identify genes by their inheritance and takes several generations – a slow business on trees that take a year to go through a generation.

Pádraic Flood from MPIPZ, was also fascinating with his description of collecting plants from East African mountains, where the altitude creates warm days and freezing nights all year round. Plants on these ‘sky islands’ are genetically isolated from each other but show the same adaptations – growing low to the ground. In a classic case of convergent evolution, Dr Flood found the same genes mutated in populations from different mountains.

Come the end of the conference, we were really proud to see Vanessa Bueno-Sancho’s talk about stem rust fungal disease of wheat, Juan Carlos de la Concepcion, speaking on the crystal structure of a protein from the fungus rice blast, and Roger Castells Graells, who wowed the crowd with videos of virus particles, taking home the third, second and first presentation prizes respectively, all for the John Innes Centre.

Our clean sweep was completed by Annalisa Bellandi, whose beautifully presented work on calcium waves in plasmodesmata claimed the poster prize.

Thanks to our colleagues at CRAG for all their hard work, and hopefully we’ll see some of you in two years’ time.