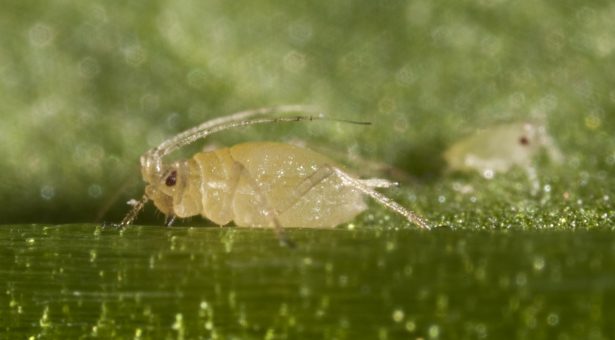 PhD student Joshua Joyce is investigating the way plants respond to attack from insect pests and how we could support plants to better defend themselves against this threat.

We asked him what makes a successful pest and how exactly do plants defend themselves?

“Insects and plants are constantly interacting with one another.

Some of these interactions are beneficial or even crucial for the plant. For example, bees that travel from plant to plant collecting nectar often pollenate the plant as they go.

However, some insect-plant interactions are detrimental for the plant. Take herbivorous insects that feed on plants and cause great damage, or insects like aphids that transmit viruses between plants.

When the victim plant is a crop or food source, we call these insects ‘pests’ because they’re capable of significantly reducing crop yields, causing a lot of problems for agriculture and ultimately threatening food security.

Fortunately, for both us and them, plants have evolved a suite of defences to protect themselves against attack.

Sometimes a plant defends itself through physical structures, like the small hairs, called trichomes, that plants have on their leaves which makes the surface of the leaf less accessible to smaller insects.

While their roots prevent plants from running away, some plants can still visibly move to limit an attack. Plants like Mimosa pudica appear to flinch when touched. As they fold their leaves, they in effect close the door and slump forward, a combination which helps to dislodge insect herbivores and stop them feeding on the leaves.

Less visibly, plants have evolved an arsenal of chemical defences to limit attack from insect pests. These include airborne chemicals which help deter insects from landing, followed up with compounds produced to stop insects feeding, including toxic substances like nicotine which can kill would-be attackers.

In addition to having the right defences to resist an attack, an effective defence response against the attacking insect requires the plant to be able to correctly identify the attacker through molecular IDs/signatures, and then to deploy the appropriate defences against that particular pest.

These sophisticated defences ensure plants are protected against most insects.

However, insects can evolve to limit or overcome these defences. These adaptations are often specific to their favoured plants and mean that most insects are able to attack only limited number of plant species. Insects that have evolved an ability to attack many plants on the other hand, are rare.

These defences also carry a cost to the plant as they require resources which could be used in growth. As such, the plant needs to only produce them when they’re required allowing them to maintain an effective growth-defence balance. It is this balance that means, if you over stimulate a Mimosa pudica, it will stop flinching.

This balance is also subject to the forces of commercialisation.

Currently it’s estimated that we lose between 5-20% of plants to pests and fields of crops are particularly at risk of losses because they provide an almost unlimited food source to a hungry and suitably adapted pest.

In addition to the well-stocked buffet a field of crops can offer, plant breeding has focussed  more on increasing the yield of each crop, than on bolstering plant defences, because they come with a cost for plant growth and can be unpalatable for human consumption. This has, over-time, led to a reduction in those defences.

Take glucosinolates for example, which are induced chemical defence compounds some plants produce to protect against insect herbivores. Glucosinolates also produce a bitter taste, giving brussels sprouts their distinctive taste for example. As consumers we don’t tend to enjoy the taste and as such, this important defence has often been reduced by breeding.

Reversing this process and trying to breed more resistant plants is incredibly challenging as identifying such plants is tricky and as defence mechanisms are often complex traits which cannot easily be transferred by traditional breeding methods.

To compensate for plant’s reduced defences, farmers have used insecticides or pesticides to control pests and kill those which attack crop plants. However, many of these insecticides, such as neonicotinoids, have off-target effects on other insect species which are not pests and in-turn cause damage to both insect populations and biodiversity.

Unfortunately, just as plants evolve resistance, so too do the pests and increasing numbers of insects are evolving resistance to pesticides.

As such, pesticide use is reducing and becoming less effective whilst the problem of pests for crop yields is also being exacerbated by climate change.

There is therefore a need for new strategies to protect our crops and yields from pests, but the good news is that a huge range are being developed.

Some of these are theoretically simple. For example, providing an environment which supports populations of the pest’s natural predators, in order to control the pest populations. For aphids, this could be populations of parasitoid wasps or ladybirds. Where this approach has been adopted so far it shows it is effective at reducing aphid populations but rarely eliminates them entirely.

Other more novel strategies exist that involve crops being engineered to produce molecules that protect against insect attack and these have often been successful. For example, some crop plants have been genetically engineered to produce Bt toxins, proteins from the soil-borne bacteria, Bacillus thuringiensis. These toxins cause damage to the gut of some insect pests and in turn, help to protect the crop. This has been widely used to protect crop yields against many insects such as protecting maize from the European corn borer.

Unfortunately, insects are developing resistance to some of these introduced toxins making this approach less effective and it is also not suitable to protect against all pests such as aphids which generally are not susceptible to the toxins. Furthermore, this kind of engineering often faces regulatory hurdles which limit the technology reaching the field.

While strategies continue to be developed and are enjoying some success, there remains an urgent need for more and, as many of these are effective against a limited set of pests, strategies which can tackle some of the more challenging pests like aphids.

For that, we need to improve our understanding of how pests and plants interact. We need to know; How do plants successfully launch a defence response against insects and how is it that some insects can overcome these defences and still attack the plant?

My work with Professor Saskia Hogenhout and Professor Dale Sanders attempts to answer these questions. We want to understand how plants launch defences against aphids and how some aphids can manipulate and overcome these defences to colonise the plant.

It appears aphids overcome plant defences by introducing proteins into the plants when they feed which limit the plants defence response and alter its biology such that the plant is susceptible to aphid colonisation.

Once we’ve established how these so-called effector proteins work, we will be able to identify or develop plants which are not affected by them, have better defences against the aphids and are therefore naturally more resistant. This would in-turn reduce the dependency on pesticides to protect plants against insects and would help reduce the effects of aphid pests on crop yields.

I always knew that I wanted to be working on something that had a positive impact on people’s lives and, even though I always enjoyed science growing up, I didn’t see myself staying in education and thought it would be more fun being outdoors or making things.

However, when I started to get involved in research and the problem solving that comes with it, I realised that I really enjoyed the challenge.

When I was at Durham University, I worked with some great plant scientists and attended the Gatsby Plant Science Summer School in 2016. It was during this time, I started to appreciate how important plants are throughout society, not only as they provide the food for our growing global population but also through their other benefits such as limiting climate change, producing pharmaceutical products and providing a home for many animals.

Through a couple of research projects and lucky breaks, I ended up really interested in how we can help ensure food security in the face of current global challenges and writing a Gatsby PhD project to explore how we can protect crop yields against pests for this.”

Josh’s PhD is funded by the Gatsby Charitable Foundation.