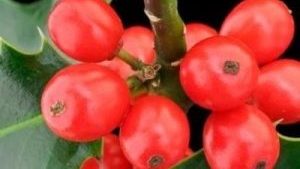 “Now the holly bears a berry, as blood is it red…”

The flavonoids are a huge class of plant natural products with a wide range of properties and functions. They include anthocyanins, intensely coloured compounds that give purple, red and blue colour to fruits (e.g. grapes, blackcurrants, raspberries, aubergines) and flowers (e.g. delphinium, geranium, fuchsia, petunia). These compounds are made inside plant cells from the amino acid phenylalanine. As the final step in their biosynthesis, sugars are added to the structure and the completed compounds are stored in the large vacuoles that typically occupy most of the volume of a plant cell. The precise colour of the fruit or petal depends on the structure of the anthocyanin molecule and also on the acidity and metal content of the vacuole – anthocyanins undergo colour shifts with changing pH and when they form complexes with metals like aluminium and iron.

The colour in the holly berry comes mainly from anthocyanins called pelargonidin glycosides. Closely-related anthocyanins give the red colour to geraniums (pelargoniums).

What’s the advantage of producing these colours?

In many cases they serve to attract animals – as pollinators for flowers, and as dispersal agents for the seeds contained in fruits. When birds eat holly berries they derive nourishment from the flesh of the fruit, and they excrete the seeds which can then produce new holly trees away from the parent plant.

Rather unusually, not all hollies bear berries.

Whereas most species of plants have male and female organs on the same plant – and usually within the same flower – holly trees are either male or female. Only the female trees bear berries – but in order to produce berries their flowers must be fertilised by pollen from a male tree, so the Christmassy sight of berry-laden holly trees requires berry-free male trees as well.