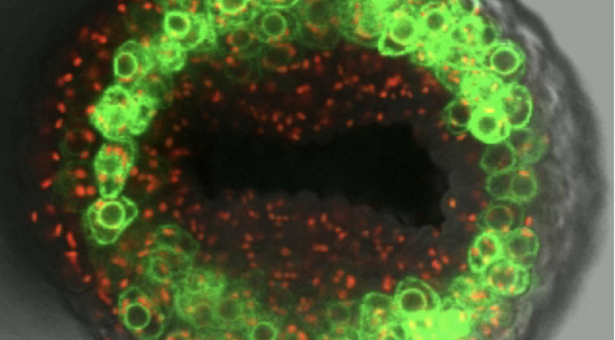 Auxin is an essential plant hormone and according to research at the John Innes Centre, it’s full of surprises.

Auxin is a plant growth hormone that many of us learn about at school. It’s the molecule that builds up on the shady side of a plant stem so that plants move towards the sun in what’s called the phototropic response.

“Auxin is morphogenic,” says Group Leader Dr Laila Moubayidin. “It’s transported from cell to cell, through plant tissues and organs, and accumulates in different concentrations to make gradients. This leads to effects in cells, tissues and organs. It really dictates what a plant looks and behaves like.”

Much of the auxin in a plant is produced in the shoot apical meristem – the very tip of a growing plant – and in very young leaves. But its roles are ubiquitous.

“I don’t think you could name a process in plants that doesn’t involve auxin at some point,” says Professor Lars Østergaard.

Auxin is involved at the very early stages of a plant’s development, starting with embryo formation, all the way to how plants respond to their environment through various tropisms, organ growth, vascular tissue and fruit development, and even seed dispersal (to name just a few).

The latter, seed dispersal, is how Lars became interested in auxin. Or rather, the absence of auxin.

He studied fruit dehiscence whereby a special tissue is formed and certain cells die, which partitions the fruit so that seeds can be released upon maturity. That process requires auxin to be pumped out.

“My initial motivation to study auxin was the absence.” Lars explains. “But of course to understand that, you must ask why it’s important that it’s not there.”

Auxins are found throughout the plant kingdom, all the way back to the first colonisers of land such as mosses.

The most common form of auxin is indole-3-acetic acid (IAA). It’s quite a simple molecule in structure, as you can see below. 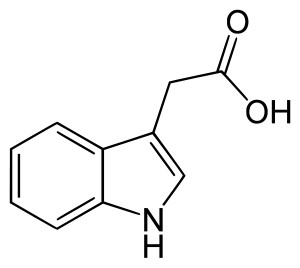 But there are different types of auxin, including a mysterious version known as 4-Cl-IAA that exists in just a few types of legumes, including peas.

4-Cl-IAA includes a chlorine atom fused to the benzene ring, like so: 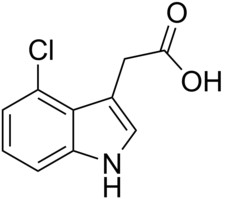 “The Fabaceae is a huge family containing thousands of species,” Lars tells us. “Yet 4-Cl-IAA is only present in a few genera. Does that make a difference? Of course it does. That’s why it’s interesting!”

“It seems to be involved in the growth of the pea pod,” Lars concludes. “Just this chloride can change the activity of the auxin.”

Though there has been work on the physiological effects of 4-Cl-IAA, work has yet to be done on understanding how it is made by plants, as well as its potential effects on signalling.

“We think it acts through the canonical pathway [more on that later], and the mechanism is what we’d like to find out,” says Lars. “We have found a set of genes differently affected by 4-Cl-IAA, for example. We’d like to find out how it’s made, knock it down using CRISPR, and see what effect that has on the development of the pod and reproduction.

A plant hormone with a difference

It’s not just different forms of auxin that can surprise us. Lars and his group have shown in recent studies that IAA has plenty yet to reveal.

Simply put, there’s often a protein stopping something from happening (such as gene expression) by blocking another one. When lots of the hormone is present, it causes cells to degrade that blocking protein, allowing the plant to do what it needs to do.

The Østergaard group showed that auxin could also act in a very different way.

”We found a pathway that works via auxin binding to a transcription factor directly,” says Lars. “It’s more similar to how animal hormones work.

“It’s interesting because the mechanism we discovered in plants is immediately reversible, which is not the case with degradation. With de-repression, to reverse the mechanism requires a replenishing of the repressor protein.”

This process occurs in the gynoecium, specifically at the very tip of the carpel. Here, it appears that auxin directly activates a transcription factor called ETTIN, which is a protein with an essential function in the style on the female part of a flower.

The style is the structure that caps the carpel, at the top of the tube where pollen must land before growing to reach the ovary where the eggs develop.

“In the gynoecium tip the tissue undergoes a symmetrical change during development, which requires quick changes in cell polarity,” explains Lars. “Auxin regulates this growth, so the new mechanism might allow auxin to rapidly effect transcription factor changes to induce these quick changes.”

This discovery opens up potentially new roles for auxin that we haven’t found yet. For example, it appears that the interaction between auxin and ETTIN may modify the structure of chromatin, the material forming chromosomes.

In a high auxin environment, for example, chromatin becomes active, allowing certain genes to be transcribed.

Dr Laila Moubayidin, who is now a Group Leader at the John Innes Centre, was working in Lars’ lab when she discovered that auxin distribution was at the heart of determining radial symmetry in the gynoecium tip.

At the heart of that discovery was auxin transport – a key facet of the hormone’s function.

“Auxin needs transport to make gradients,” Laila explains. “That happens via PIN proteins. With auxin transport people are interested in the polarity of these transporters, which is how they establish gradients.”

PIN proteins are transport molecules found in the cell membrane that allow auxin to leave a cell. Their non-symmetrical distribution determines how auxin travels between cells through a plant.

In the plant style, however, Laila noticed something a bit different.

In fact, the style itself is a bit different. The carpel is made up of two modified leaves that join to form a tube. They’re bilaterally symmetrical – in that they resemble a mirror image. The style, which caps the tube, has radial symmetry, like a starfish.

“When I was looking at the gynoecium tip, I noticed that the PIN proteins were completely apolar,” she tells us. “That meant auxin was distributed all the way around, which was driving development of this radially symmetrical structure.”

When auxin is taken away, the organ reverts to bilateral symmetry and the carpel is not capped.

The goal of Laila’s group is to find the mechanisms used by all organs to develop radial or bilateral symmetry.

“Symmetry is one of the most fundamental aspects of how organs develop their shape,” says Laila. “As with maths, physics, and famously through art, symmetry is central to plants. It leads to the development of leaves, flowers – and the shapes generated give organs their unique functions.”

“Now we understand auxin’s central role, we want to understand the consequences,” says Laila. “How do the cells divide in these parts of the plant? What is the cell cycle machinery that responds to auxin?”

As well as probing deeper into auxin transport, the Moubayidin Group is also investigating a class of molecules known as cyclins, molecules that govern cell division and have been shown to play a role in symmetry, and how they interact with auxin and other plant hormones.

“The long aim,” says Laila, “is to look into evolution due to this amazing diversity of shape and function, which symmetry is at the heart of. It’s fascinating that this central mechanism, from a common blueprint, can be changed in so many ways.”

Revealing these evolutionary stories, and the varied roles of auxin, also has an impact on how we understand and can improve our crops.